I am back at 84 McClellan Street with my family, which means I am truly home.

And this morning the story I wrote for the Boston Globe about my research in Rome was published.  If you have been following this blog, lots of the observations and photos will be familiar!

One of the world’s great cities bears the signature of a Fascist dictator, and nobody wants to talk about it 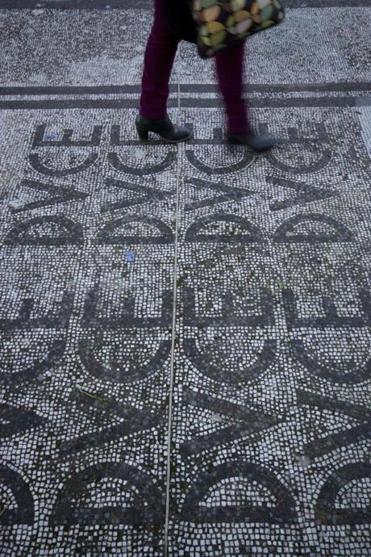 The Foro Italico sports complex still retains its mosaic floors with Mussolini’s title of “Duce.”THE MAYOR of Rome, Ignazio Marino, made a splash when he first took office last August: He proposed to tear down the Via dei Fori Imperiale, the four-lane boulevard that cuts right through the heart of the city’s most prominent ancient excavations.
Posted by Max at 9:21 AM 1 comment: 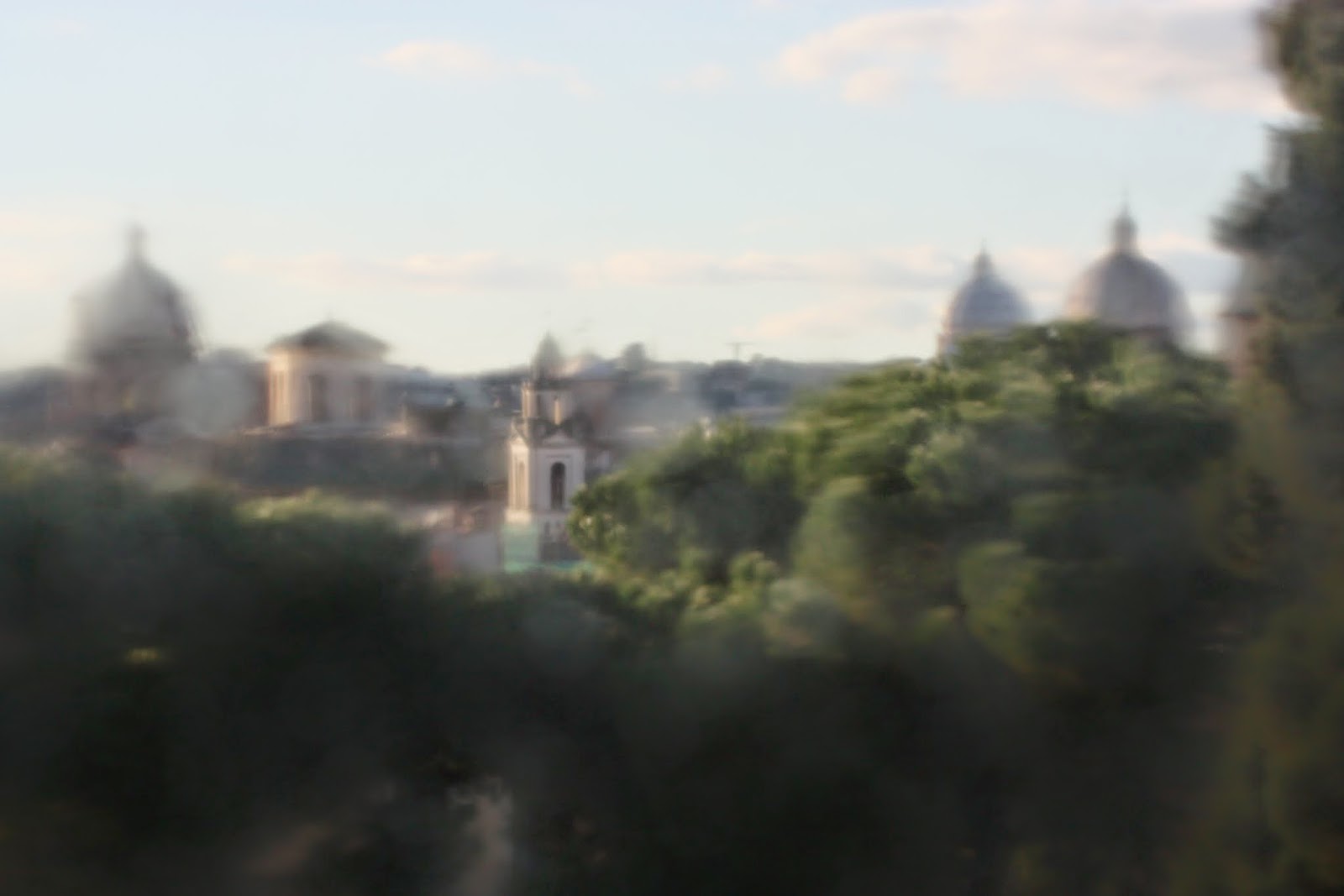 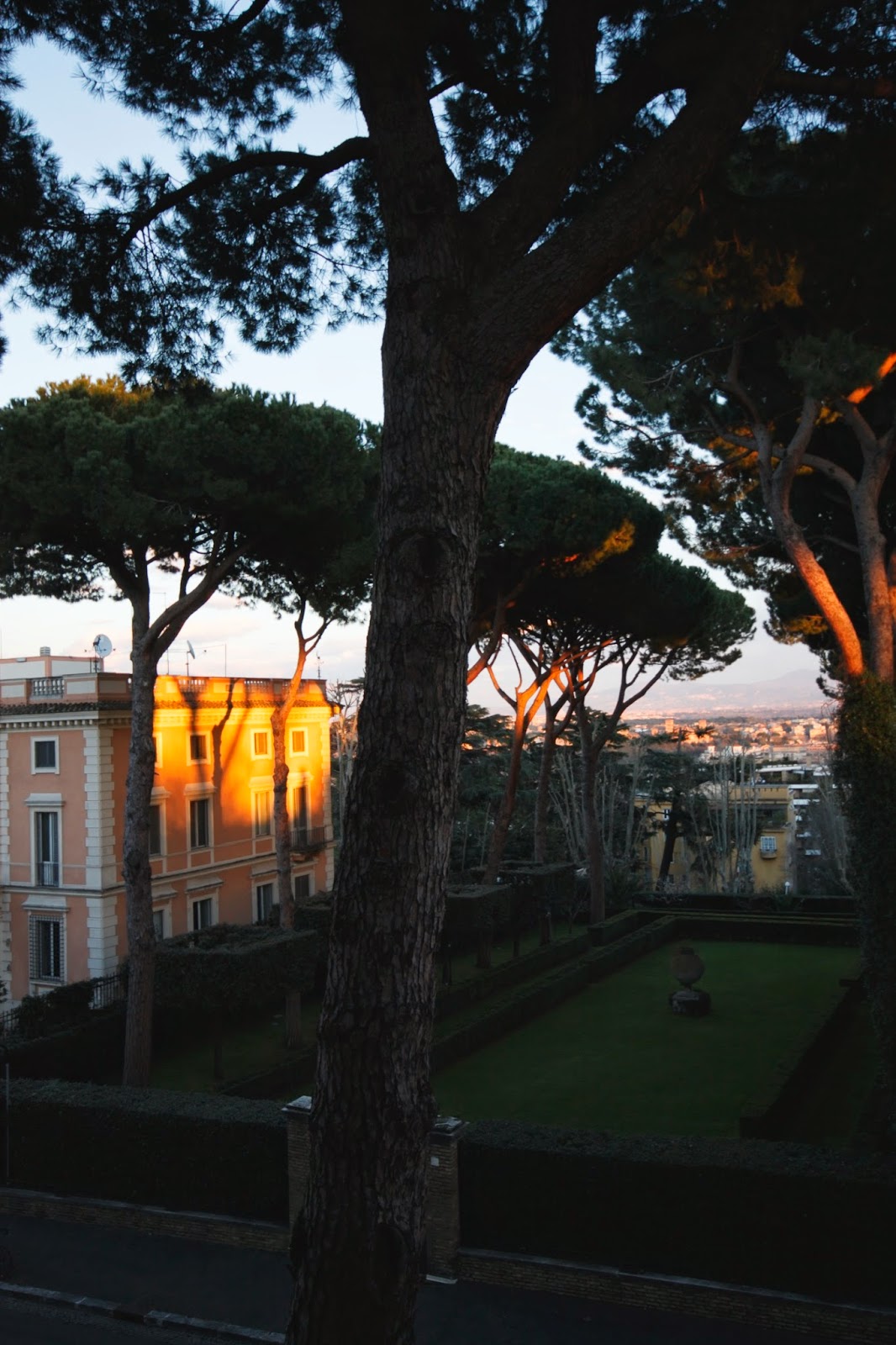 My studio, like much of Rome, was built for a giant.  I type on my three-pound-laptop, and look up at the ceiling which feels a time zone away, twenty or thirty feet up in the sky.  The windows span the whole of this height; to open them is to open up a massive hole in the building.

The first thing went up on the wall is a map I purchased, just to make my mark on the twenty-foot long expanse, to justify my use of this glorious studio when in fact I’ll be using exactly none of it for most of my work.  (The truth is that the invitation of the wall space, arrives at the Doorstep of Lost Careers and Avocations -- my passion for photography -- and led me, come June to do an exhibit of my photographs of Rome and Italy.  I ended up using an entire wall to describe the work I have been doing here).

The map I put up at the end of the first week is a highly detailed map of ancient Rome in the era of Constantine, in the 4th Century AD.  It shows a city of marble -- beautiful, temples and courtyards, monuments, and walls.  There is the Temple of Marcellus, rebuilt and awaiting spectators.  Circus Maximum is complete, and the Emperor’s loggia on the Palatine Hill is returned, whole, to its place overlooking the entire field.  There is the Theater of Pompey and the temples of Largo Argentina, where Caesar was murdered.  Rome is re-created as it must have been at its height, before the fall. 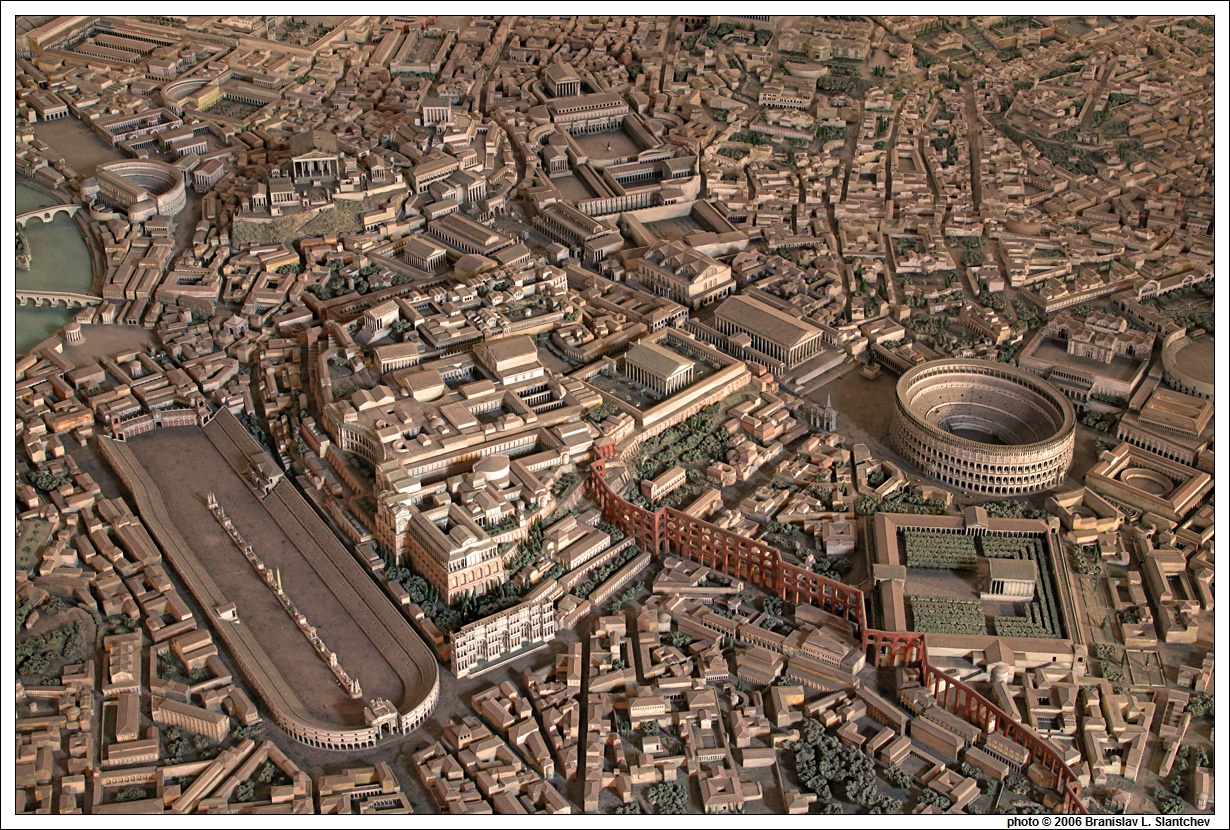 The map is not an accurate rendition of a city, but a dream, created by crushing together a century of building, cleaning it up in order to produce a mirage of the Eternal City. This kind of map imagines history as we would like it to be, as culminating in a moment, where trajectories of politics and building projects manage to get into lockstep, move together in a singular rhythm, like a phalanx of soldiers along the Appian way, clicking their boots along the stones in perfect perscussionary harmony, ending with an image of a city as whole complete an unchanging.  There is no kinetic energy here.  All has come to a rest.

Sigmund Freud didn’t know of this map, but he knew of this dream, of making the entire history of a city visible. The opening of Civilization and Its Discontents tells a tale this longing, to make all layers visible at once, to remove repression, remove history, and lay before us our entire history.   It is impossible, but becomes the fundamental metaphor for the entire book.

At the start of the book he acknowledges that indeed, in Rome “much of the old is still there, but buried under modern buildings. This is how the past survives in historic places like Rome.”  But then he paints a picture for his readers, asking them to make a “fantastic assumption

that Rome is not a place where people live, but a psychical entity with a similarly long, rich past, in which nothing that ever took shape has passed away, and in which all previous phases of development exist beside the most recent. For Rome this would mean that on the Palatine hill the imperial palaces and the Septizonium of Septimius Severus still rose to their original height, that the castle of San Angelo still bore on its battlements the fine statues that adorned it until the Gothic siege. Moreover, the temple of Jupiter Capitolinus would once more stand on the site of the Palazzo Caffarelli, without there being any need to dismantle the latter structure, and indeed the temple would be seen not only in its later form, which it assumed during the imperial age, but also in its earliest, when it still had Etruscan elements and was decorated with terracotta antefixes. And where the Coliseo now stands we could admire the vanished Domus Aurea of Nero; on the Piazza of the Pantheon we should find not only the present Pantheon, bequeathed by Hadrian, but the original structure of M. Agrippa; indeed, occupying the same ground would be the church of Maria Sopra Minerva and the ancient temple over which it is built. And the observer would perhaps need only to shift his gaze or his position in order to see the one or the other.

He wakes us from our dreamy longing:  “It is clearly pointless to spin out this fantasy any further: the result would be unimaginable, indeed absurd.”

The absurdity of seeing all of Roman history at once is, for Freud, the tragedy of the human psyche.  We cannot exist with all layers visible, on an equal plane.  Repression is necessary for survival; but uncovering the layers, and the legacy of those layers, is necessary to thriving as a healthy adult.

This powerful image immediately brings another writee to mind, Jorge Luis Borges, whose most famous character, Ireneo Funes, seems almost invented to play out that absurdity and to question the excess of memory.  Borges’ Funes is man who is all memory.  Funes was once a man who was “what every man was – blind, deaf, befuddled, and virtually devoid of memory….he had lived, he said, for nineteen year as thou in a dream:  he looked without seeing, heard without listening, forget everything, or virtually everything (p. 134 to 135).  After a riding accident, he awoke from unconsciousness with his memory perfect.  And more so:  he felt every memory with great intensity.  The narrator tell us that for Funes, “the most trivial of his memories was more detailed, more vivid than our own perception of a physical pleasure or a physical torment (p. 137). Funes could continually perceive the quiet advances of corruption, of tooth decay, of weariness…..he saw – he noticed – the progress of death, of humidity” (p. 137, 136). The capacity of his brain to capture memories – all memories, every one, no matter how significant turns his mind, and his very being, into a “a garbage heap.” And it made him seem old, desperately old, at the age of 19:  “He looked to me as monumental as bronze – older than Egypt, older than the prophecies and the pyramids.”

Borges ends the story: “Ireneo Funes died in 1889 of pulmonary congestion.”  The excess of memory transmuted into a congestion of the lungs.  He breathed memory with every intake and exhale. The memories were too much.

Borges’s story seems almost to be commentary on Freud.  For Funes is in fact the man whose memory is completely unrepressed.  It flows like a mighty stream; it drowns him.  We long to remember so much; and need, equally, to survive and grow, to forget.

To visit great buildings of the Roman past is to visit even older buildings of the Roman past.  Spolia -- materials reused for later buildings -- is almost the essence of the Roman urban landscape.  To visit St. Peter's is to visit the Colosseum and other ancient buildings, because in those walls are the materials from those ancient buildings. Freud, in making his famous analogy between repressed memory and the layers of the Roman past, notes that  "many of the baroque palaces of Rome bear to the ancient ruins, whose hewn stones and columns have furnished the material for the structures built in the modern style" (Interpretation of Dreams).  (By the way, before you lash out agains the Catholic Church or the Renaissance more generally, for destroying by appropriation so much of the Roman past, read my colleague David Karmon's book, Ruins of the Eternal City, who argues that as much as they pillaged Roman buildings, the Popes and leaders of city government had thoughtful approaches to historic preservation, even if we not agree with them today).

Here are a few images I have taken over the past several months of spolia. 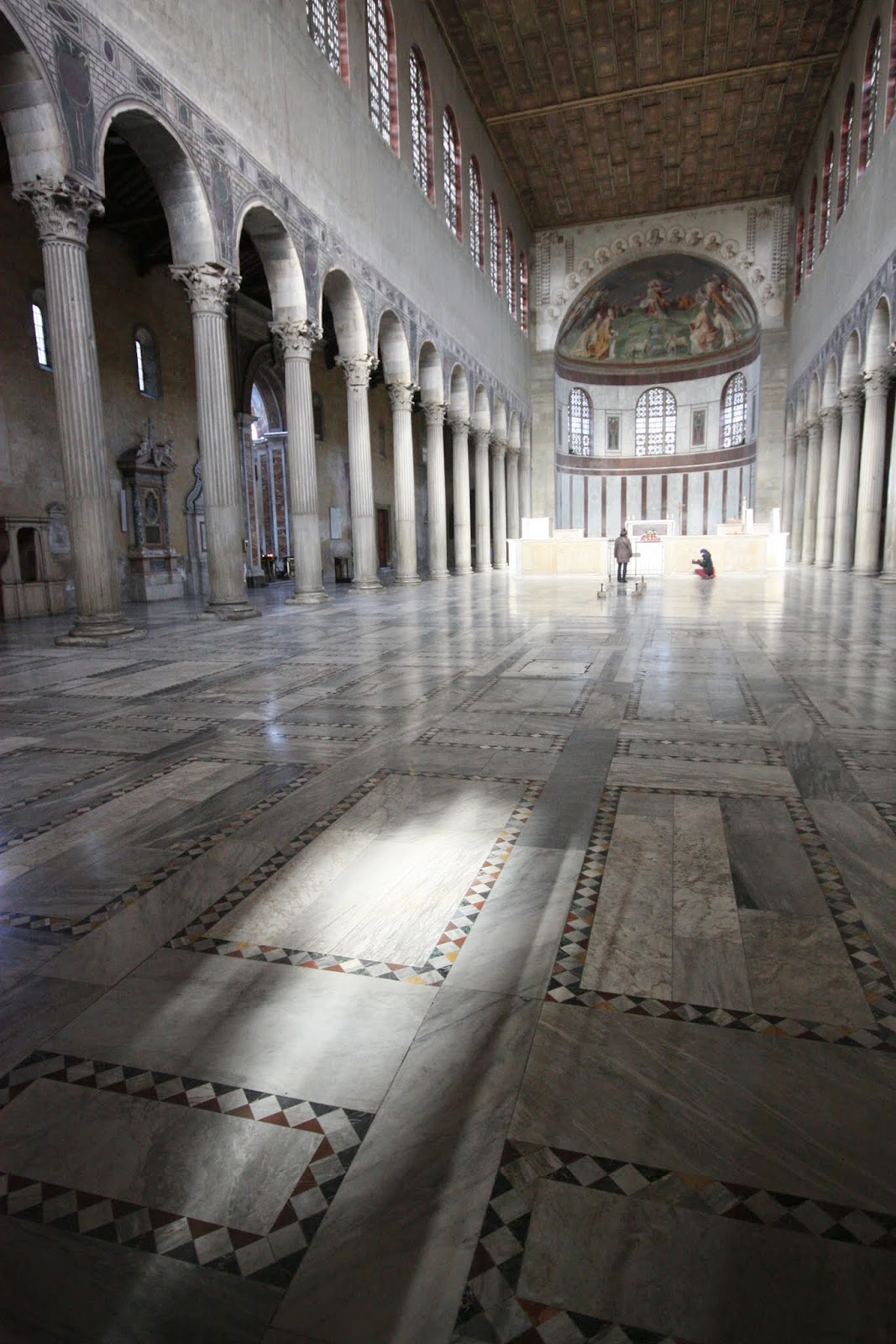 Santa Sabina on the Aventine 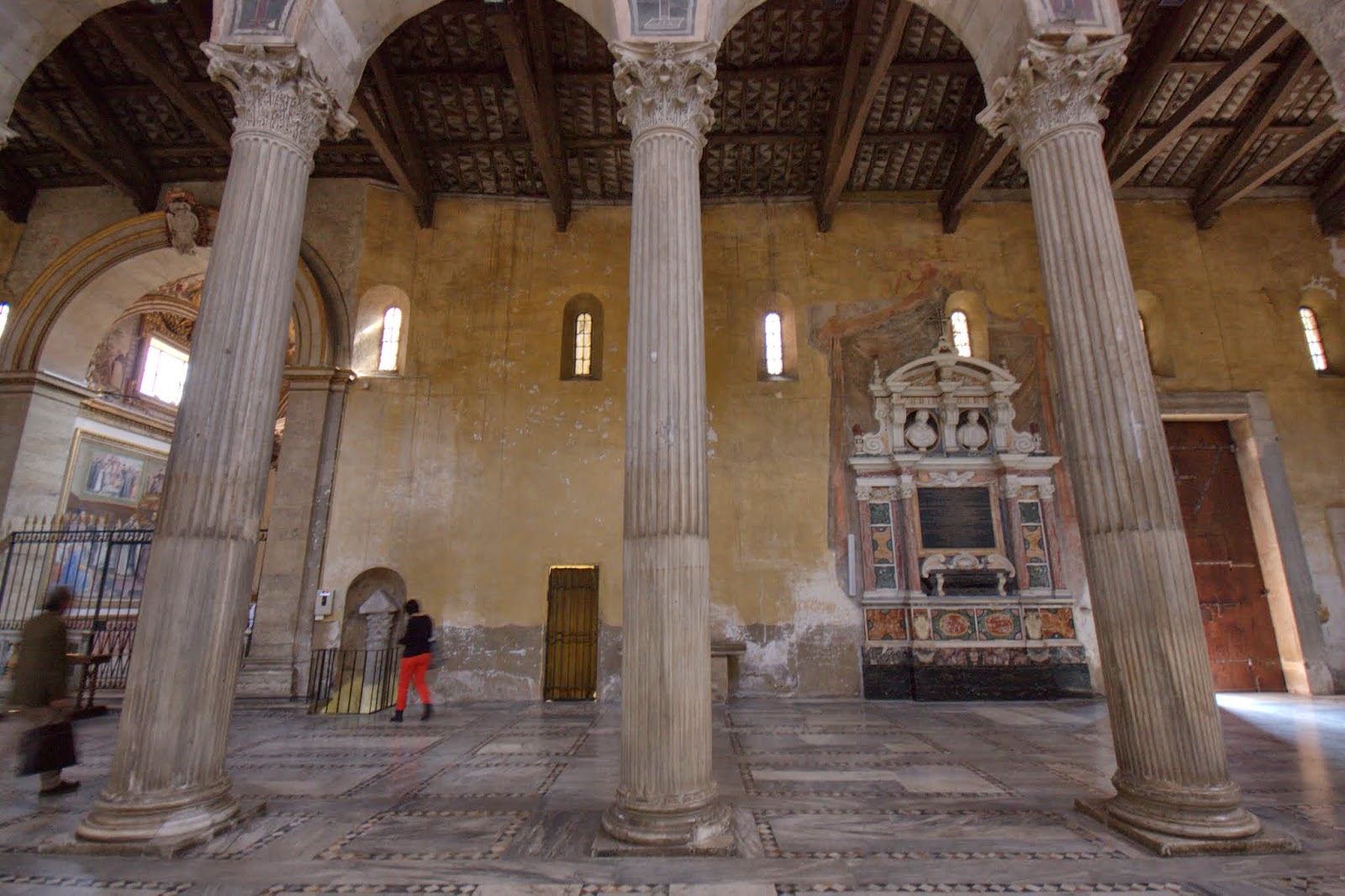 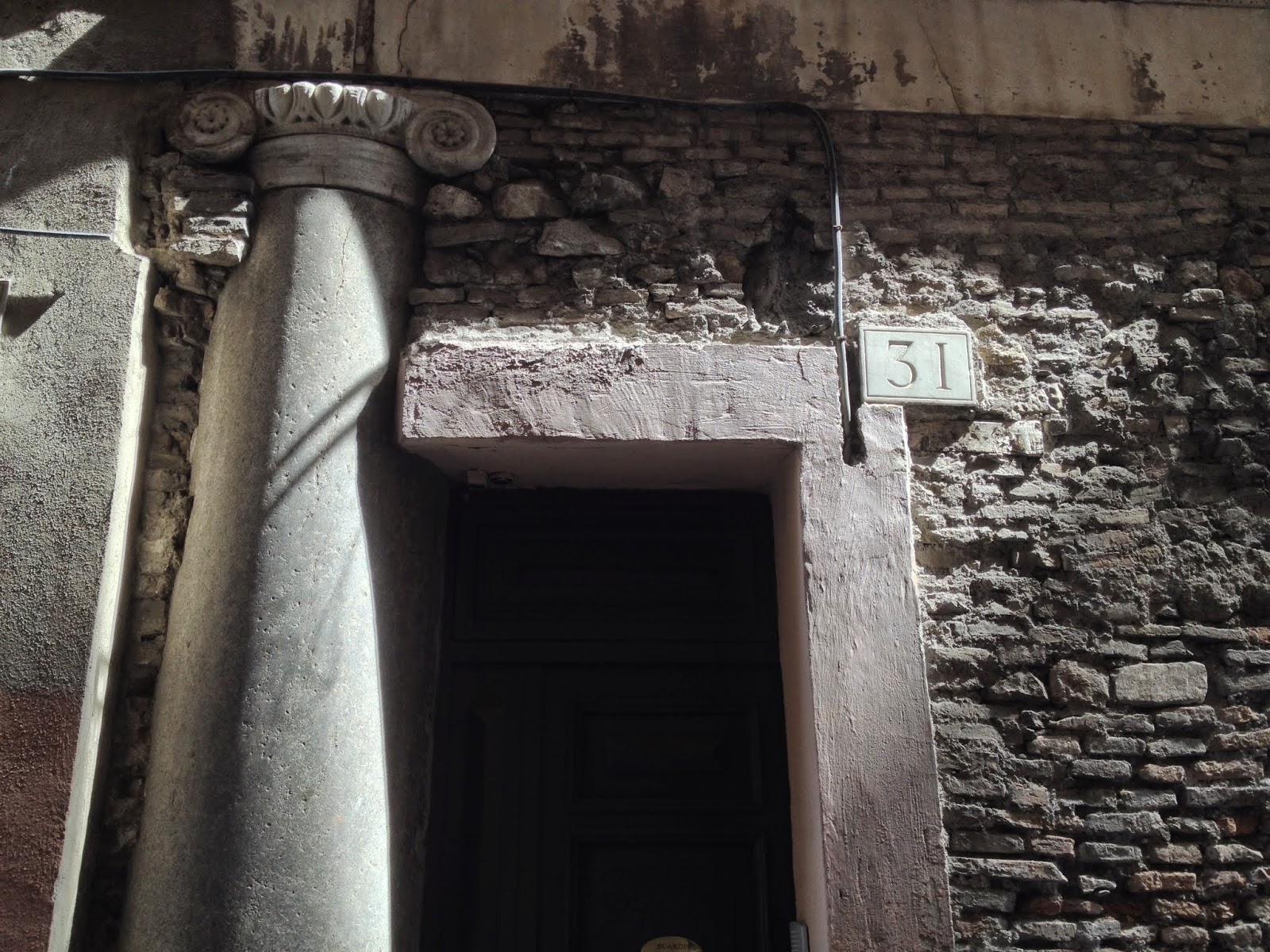 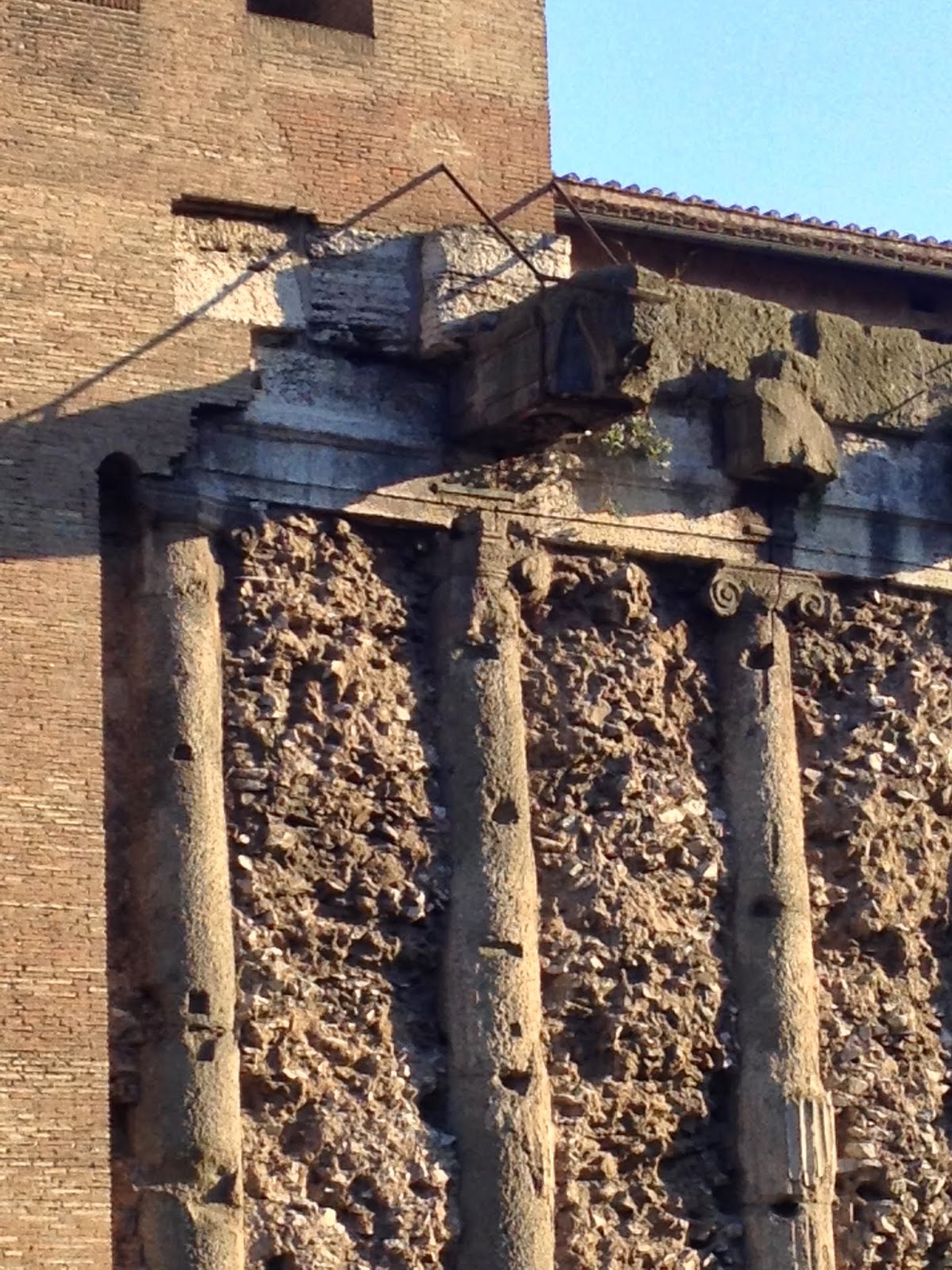 near Santa Maria in Cosmedin 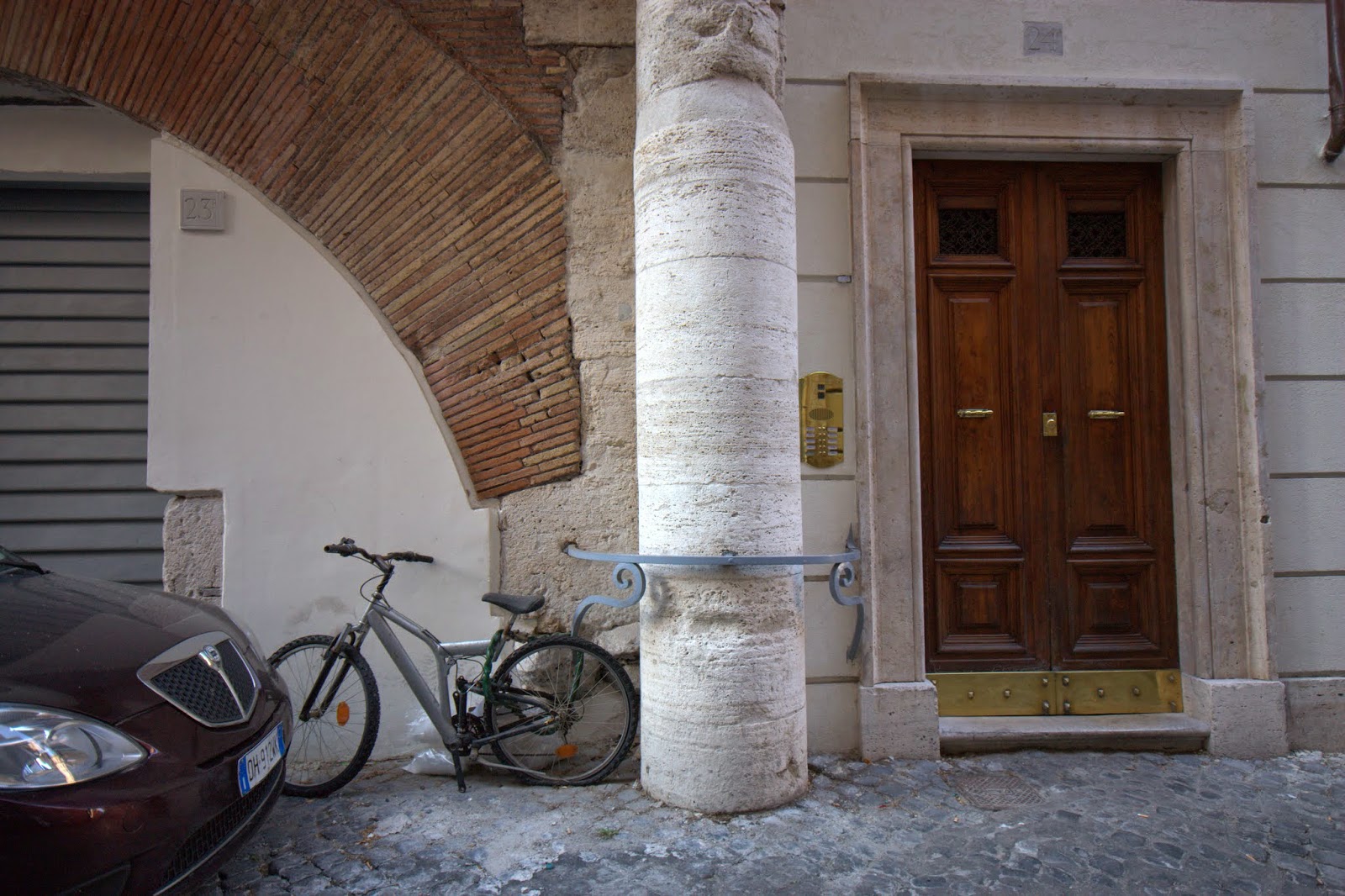 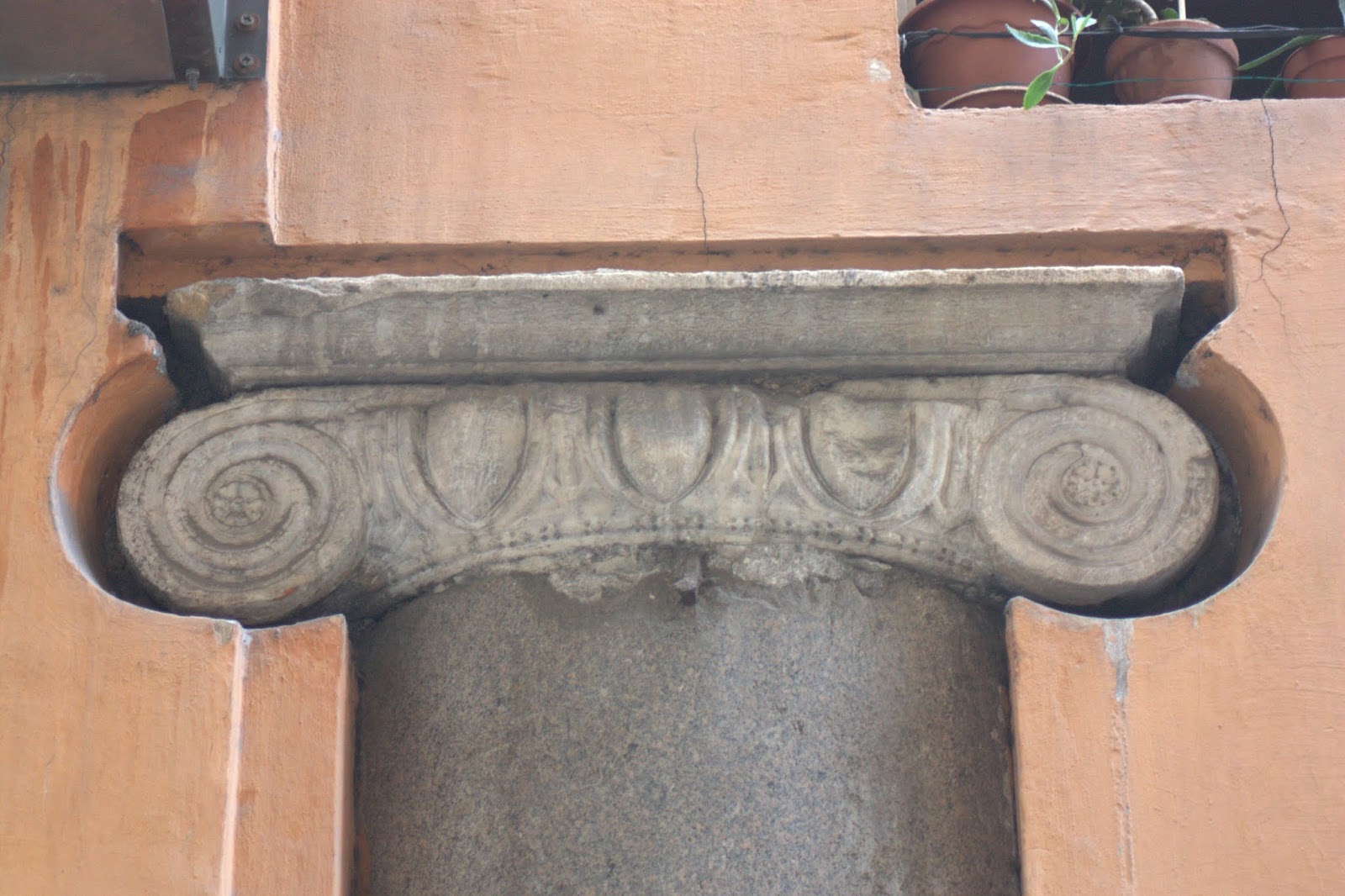 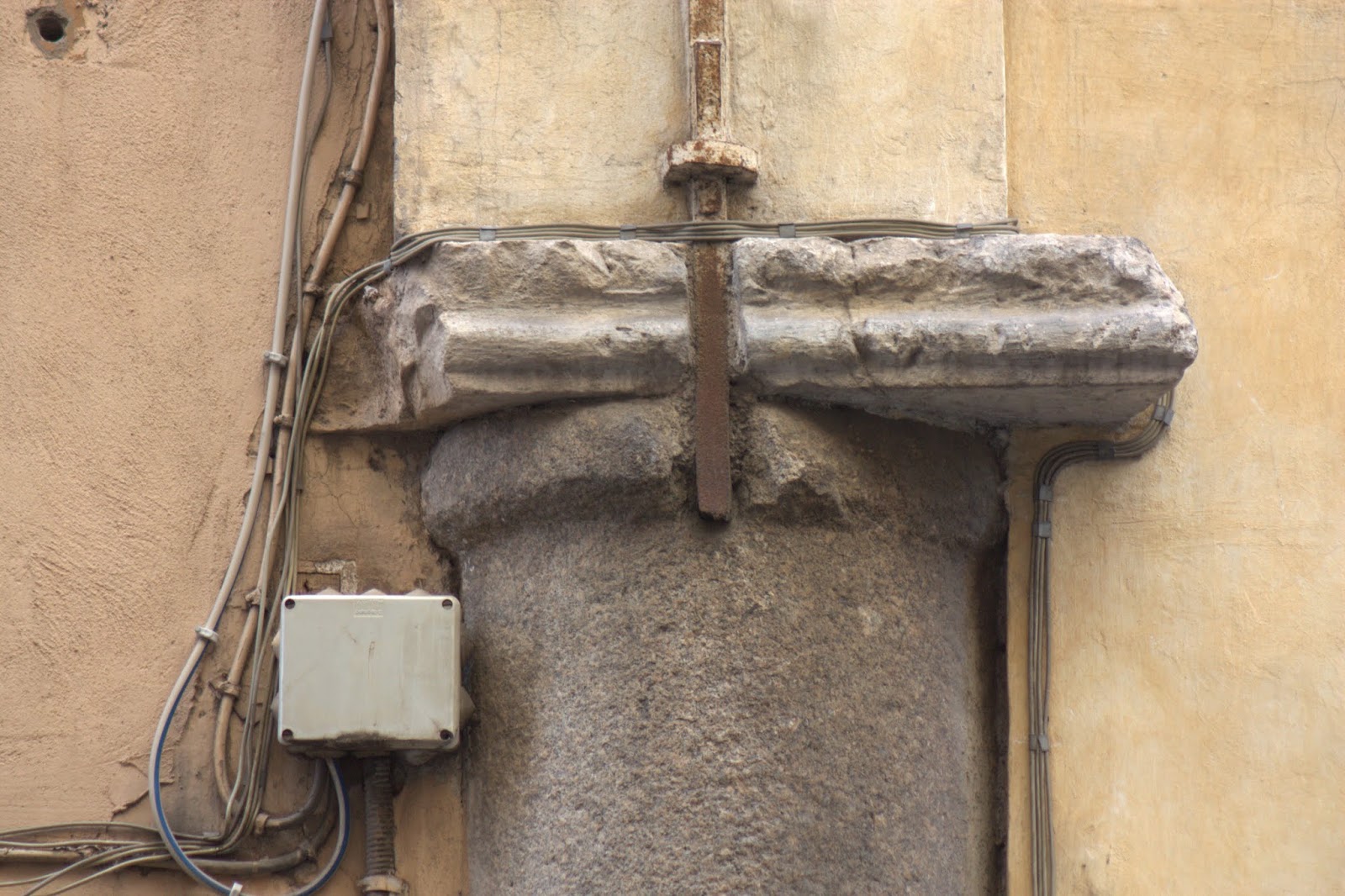 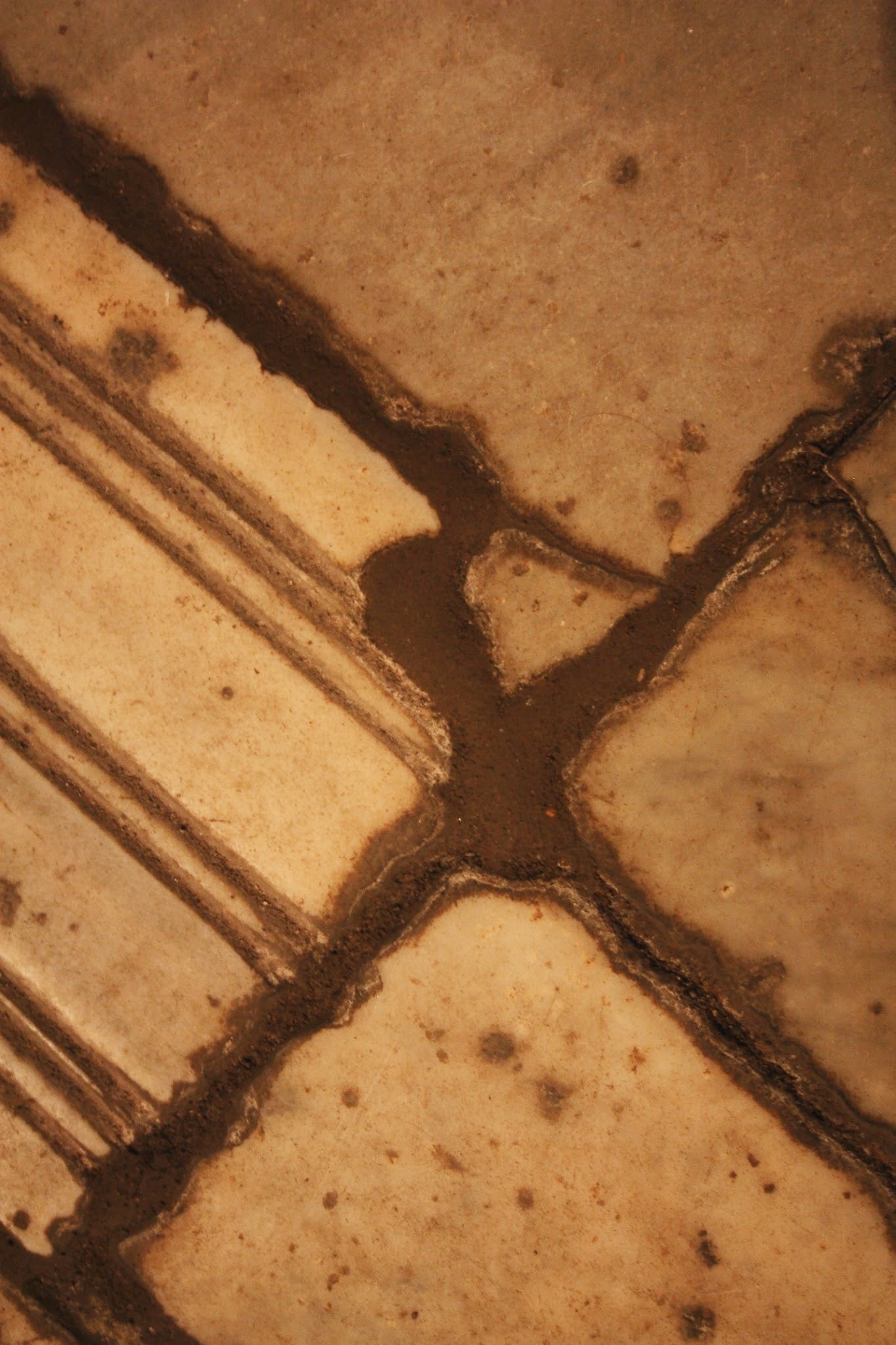 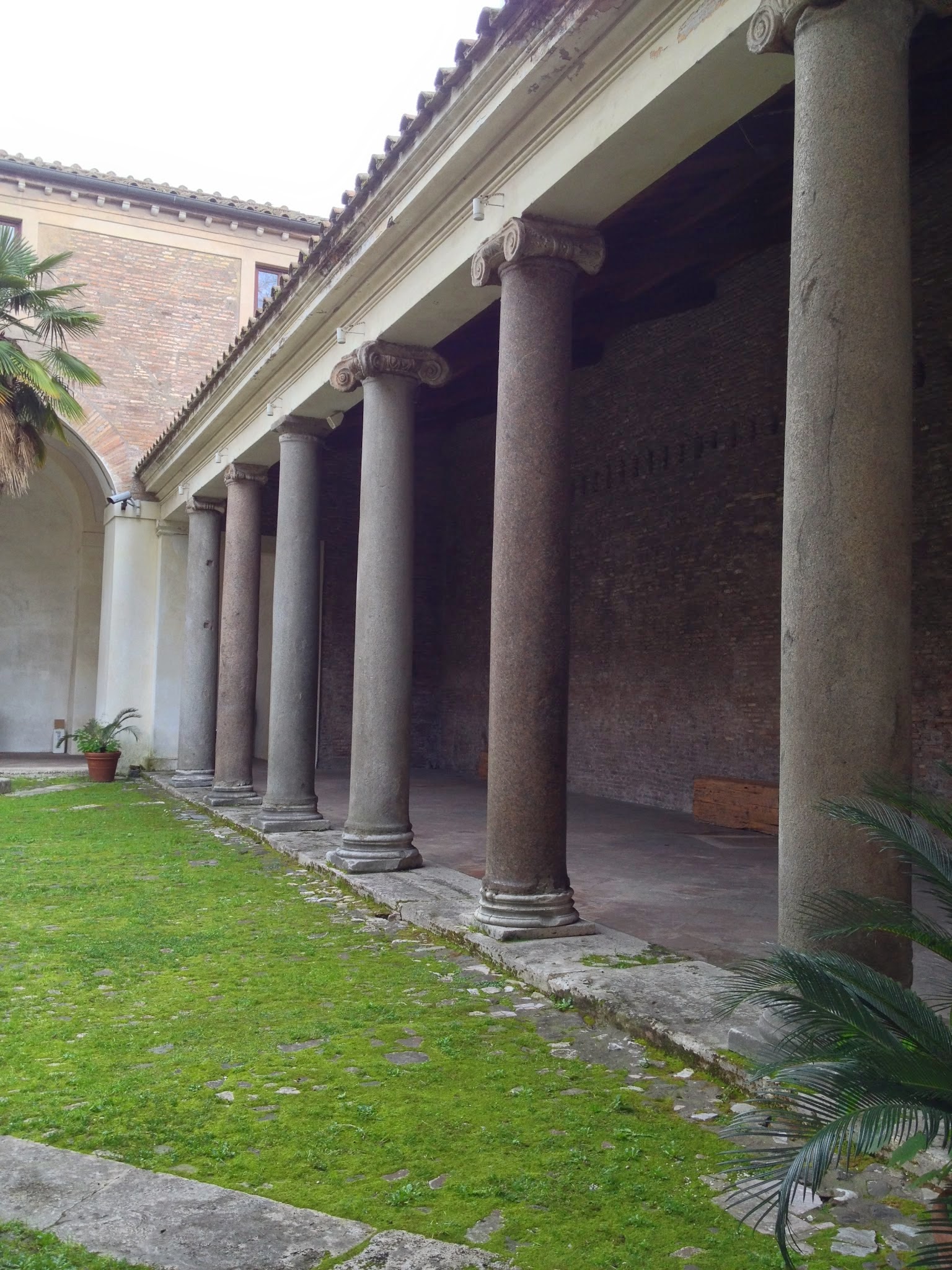 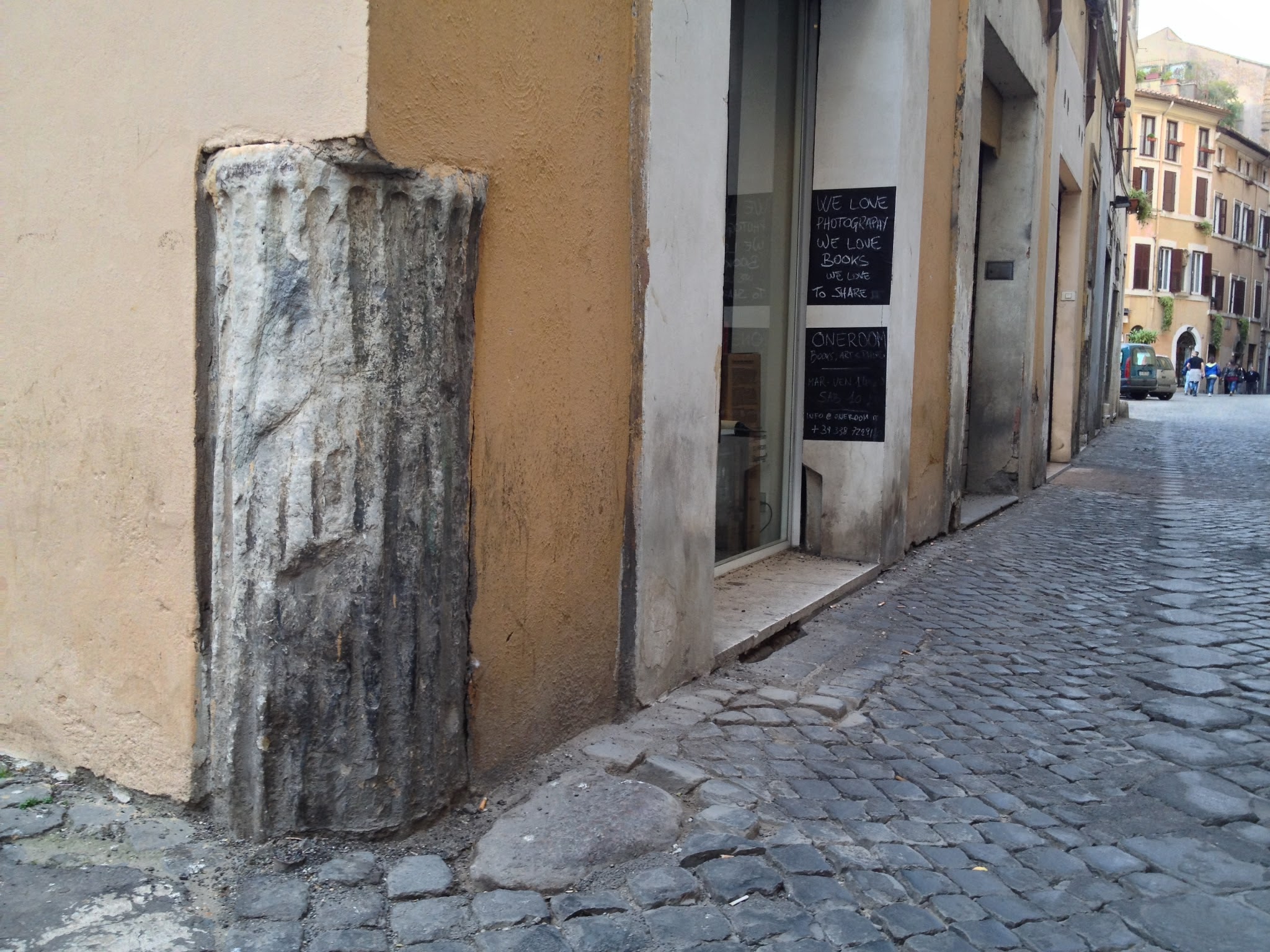 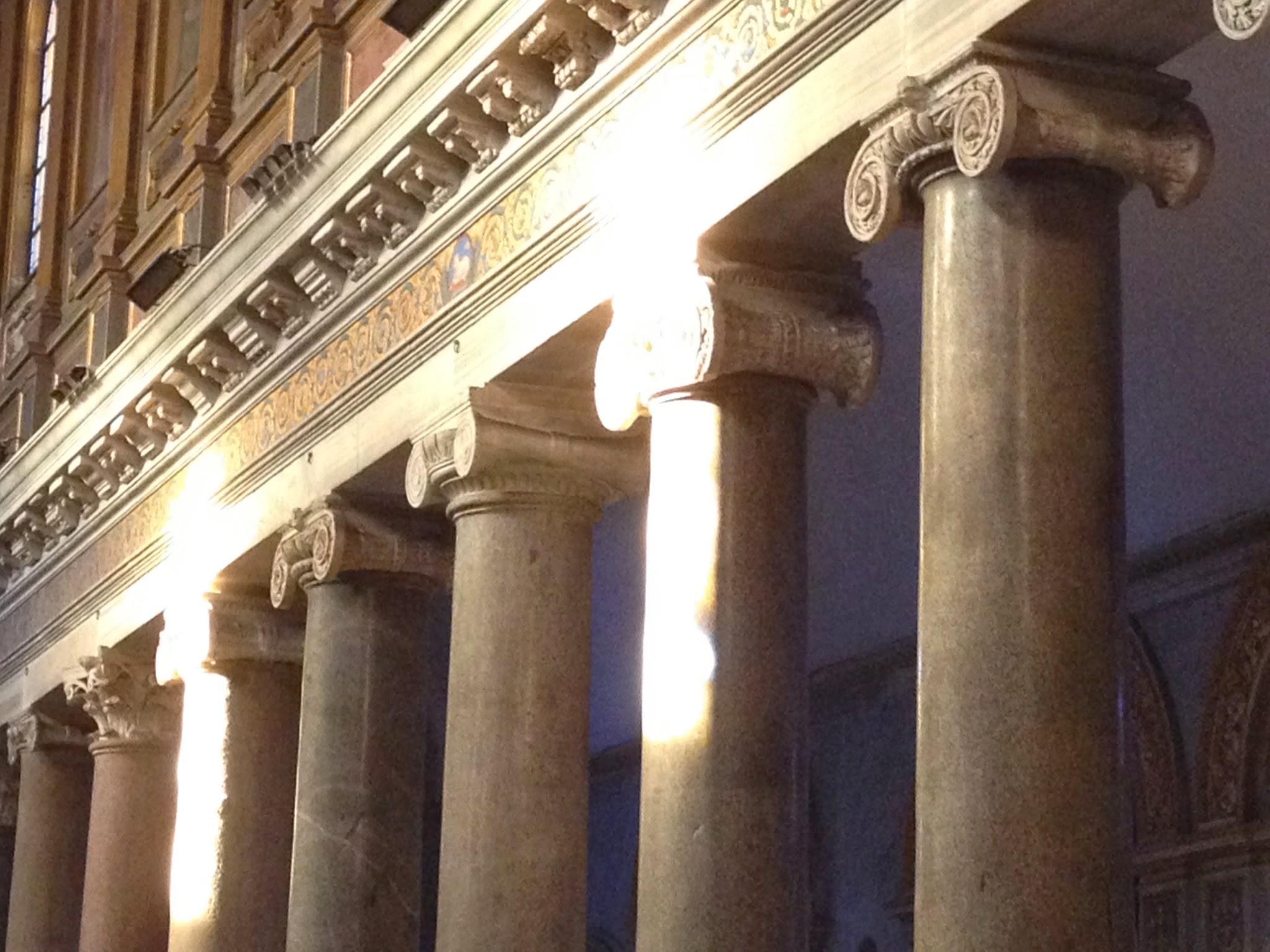 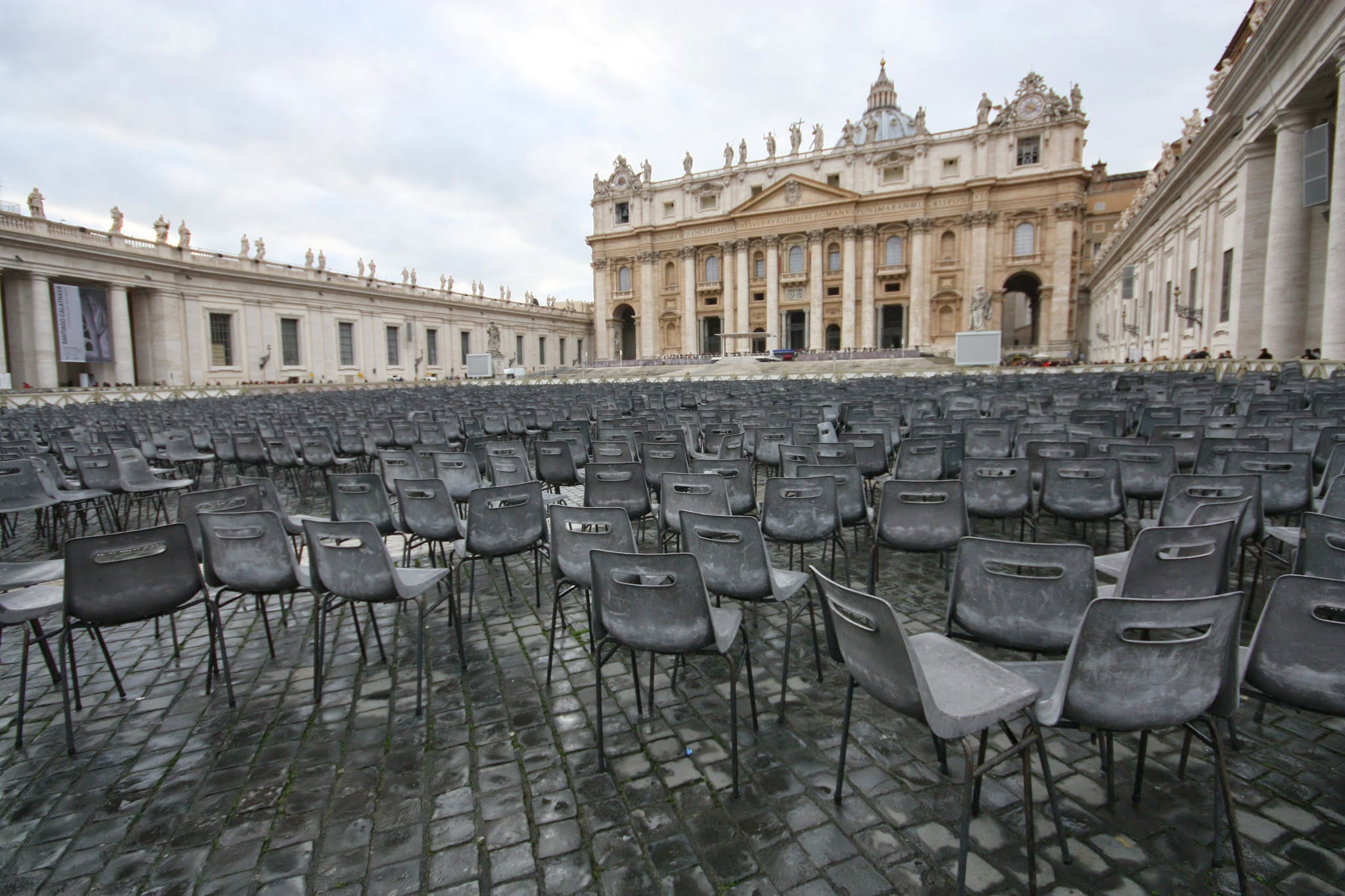 By chance, or otherwise, I happened upon Wim Wenders' Urban Solitude photography exhibition in Rome, on the very last day it was open.  I'm glad I was drawn there.  The images reminded me of my old high school friend Mark Woods' photographs, which I saw soon before I left for Rome, as well as those of another Amherst high school graduate, Tim Davis, who was a Rome Prize fellow several years ago. Wenders images are of silent corners of cities, the odd-man-out building, the stencil peeking through stucco in the back of a building, the emptiness of a Safeway parking lot, the Hopper-like stillness of a small-town commercial strip.

But it was his words which struck me as much as the images:   "Sometimes the absence of a thing makes you so much more aware of it." This reminded me of a line from Anthony Doerr's book about a year at the American Academy, where he says that perhaps the idea of snow falling through the oculus of the Pantheon -- a rare event -- is better just that way, and not realized.

And in his Act of Seeing, Wenders writes that "A city does not tell you a story, but it reveals history.  Cities do that in different ways: some make their history visible, others rather hide it.  They can open your eyes, like movies, or they can close them. They can leave you abused, or they can nourish your imagination."

I walked from the train station in Venice through Cannaregio and on to San Marco and then took a vaporetto to Punta della Dogana museum, whose interior was redesigned by Tadao Ando. 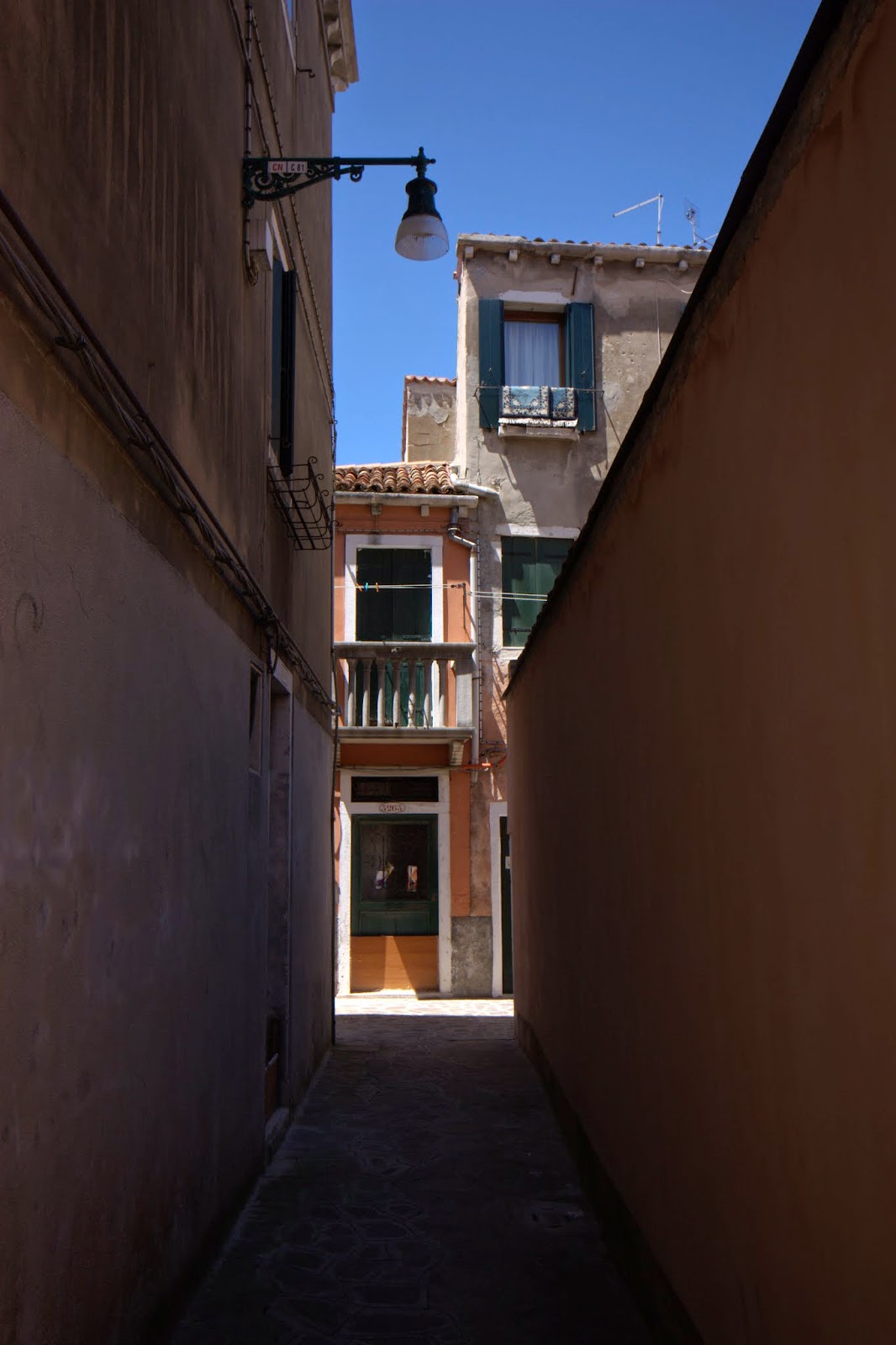 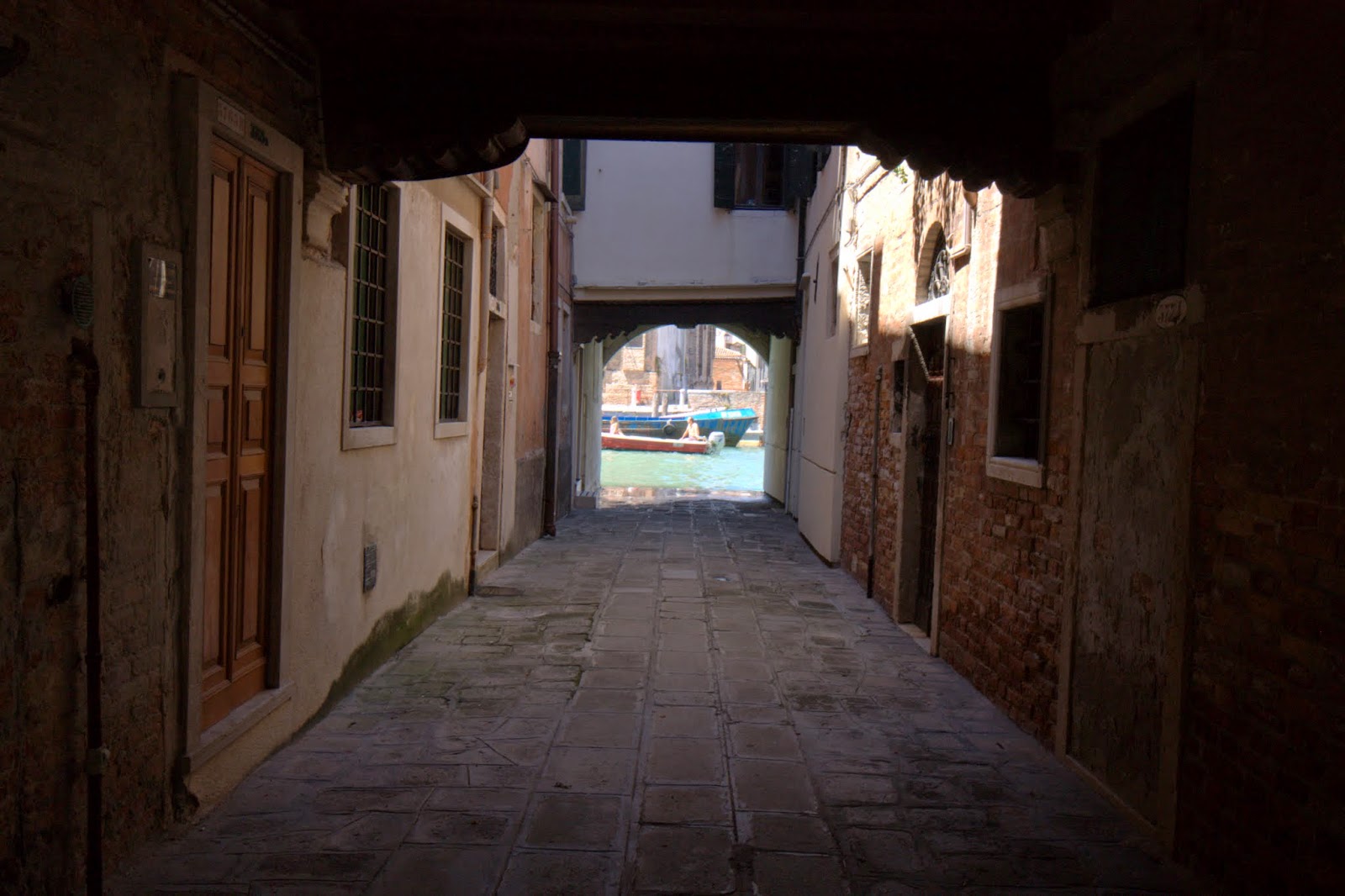 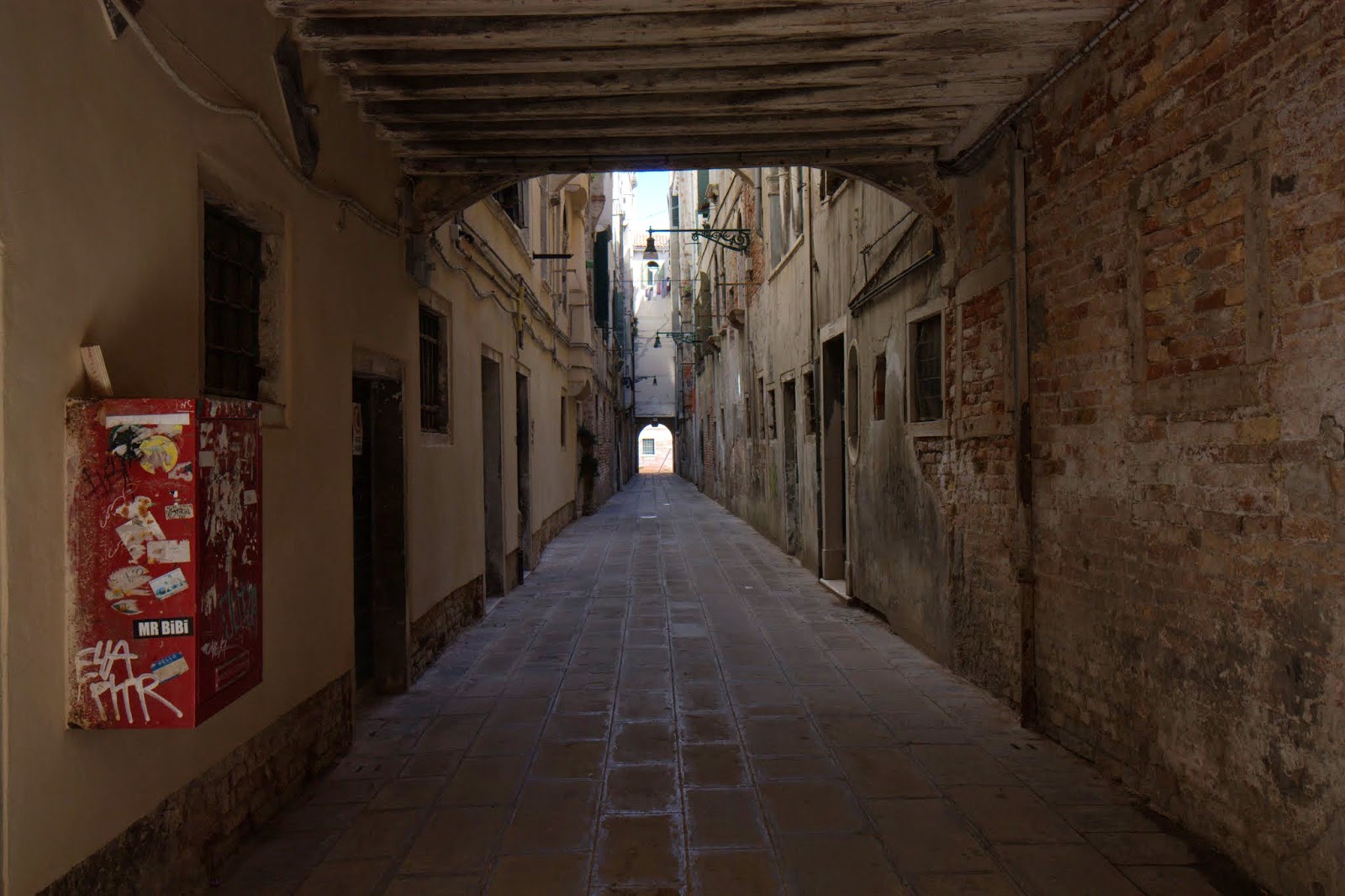 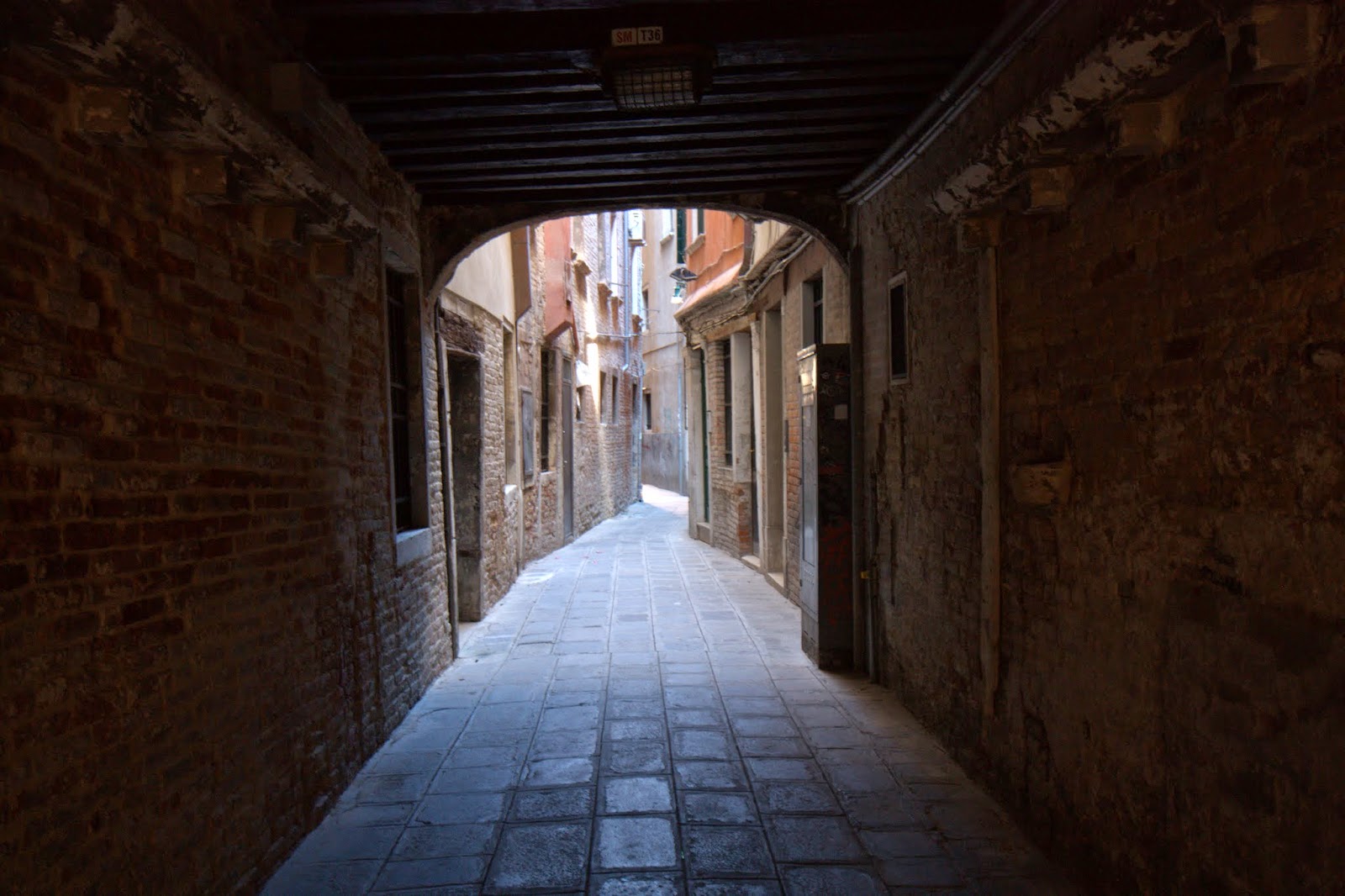 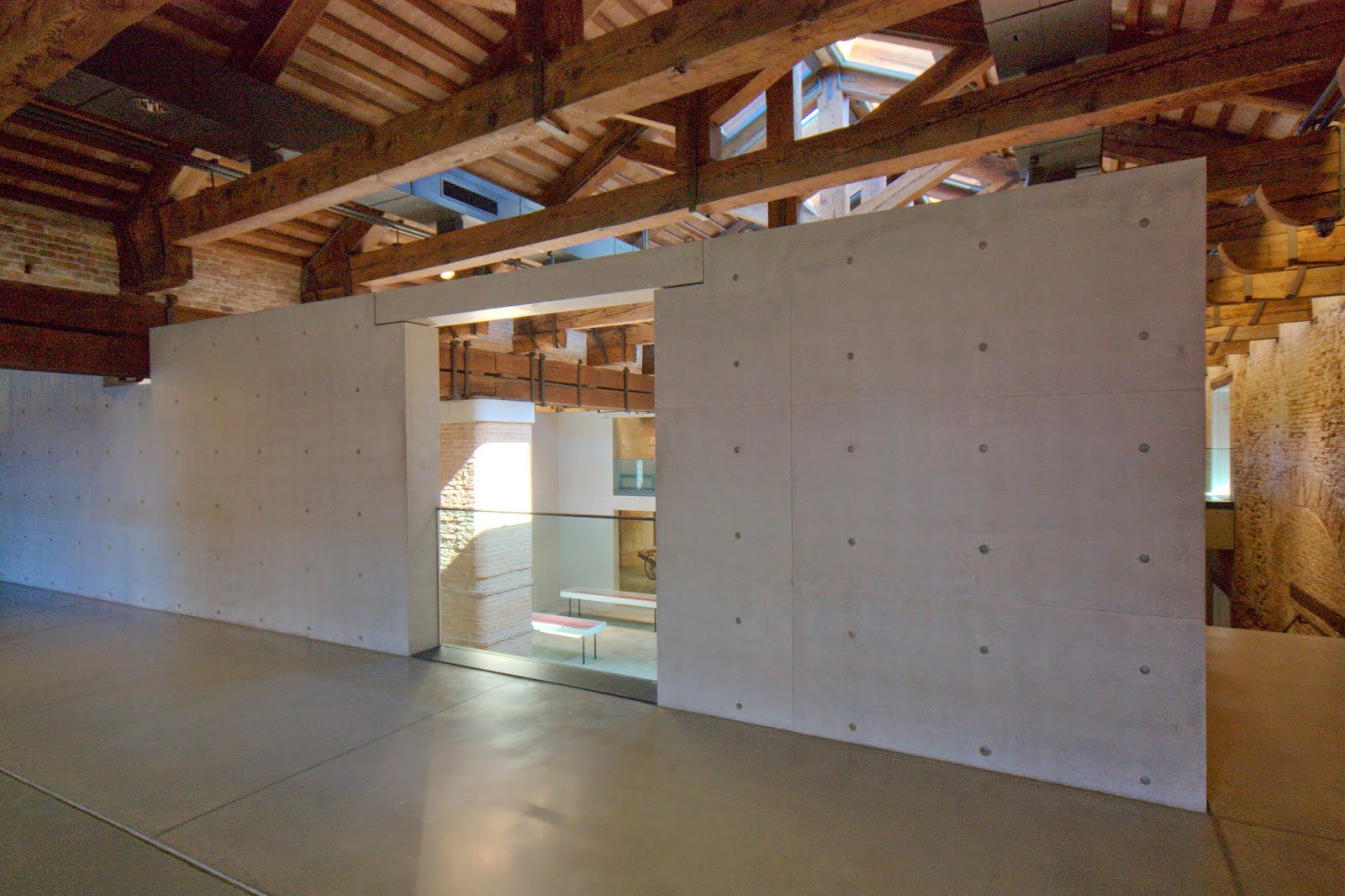 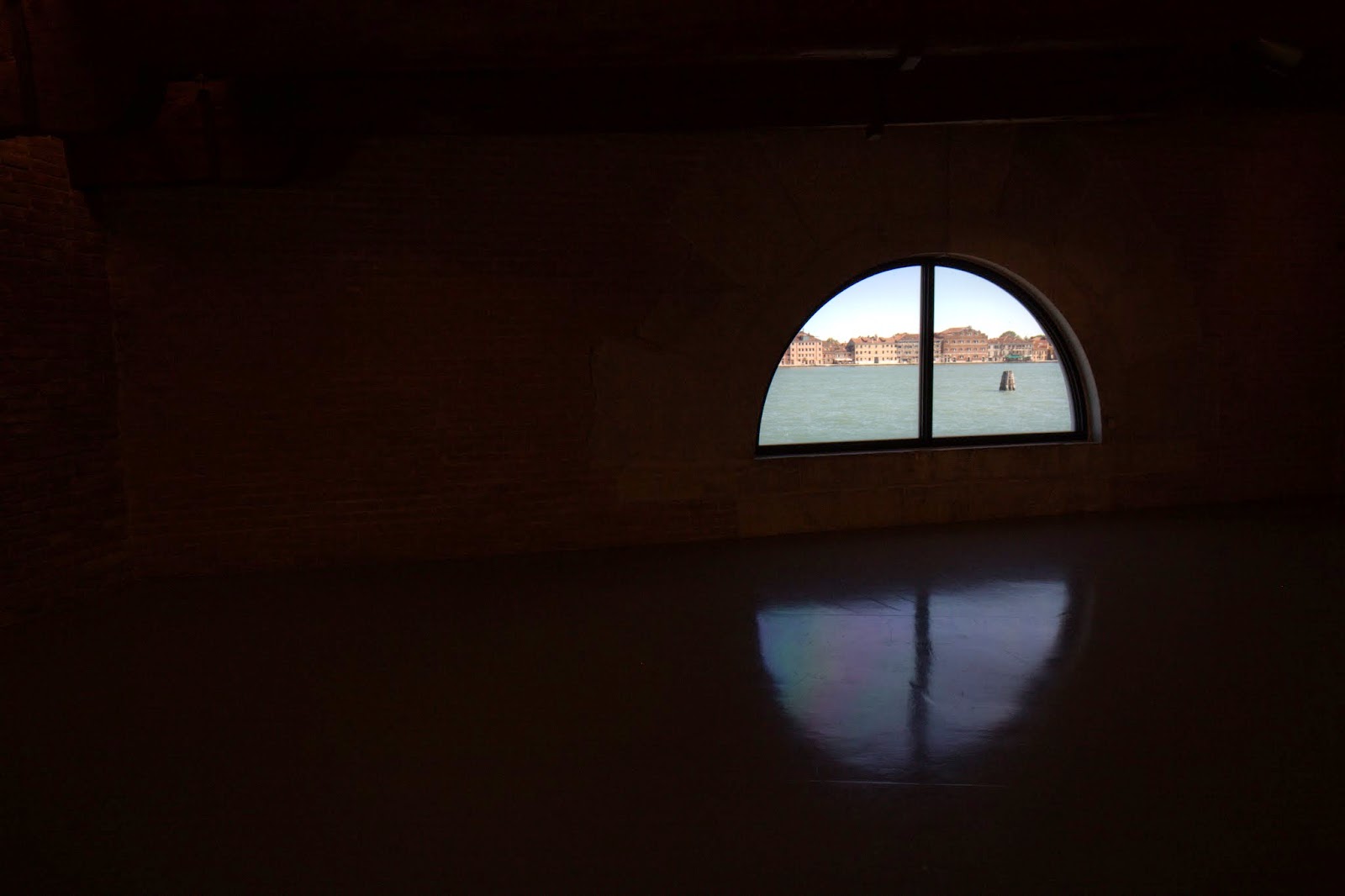 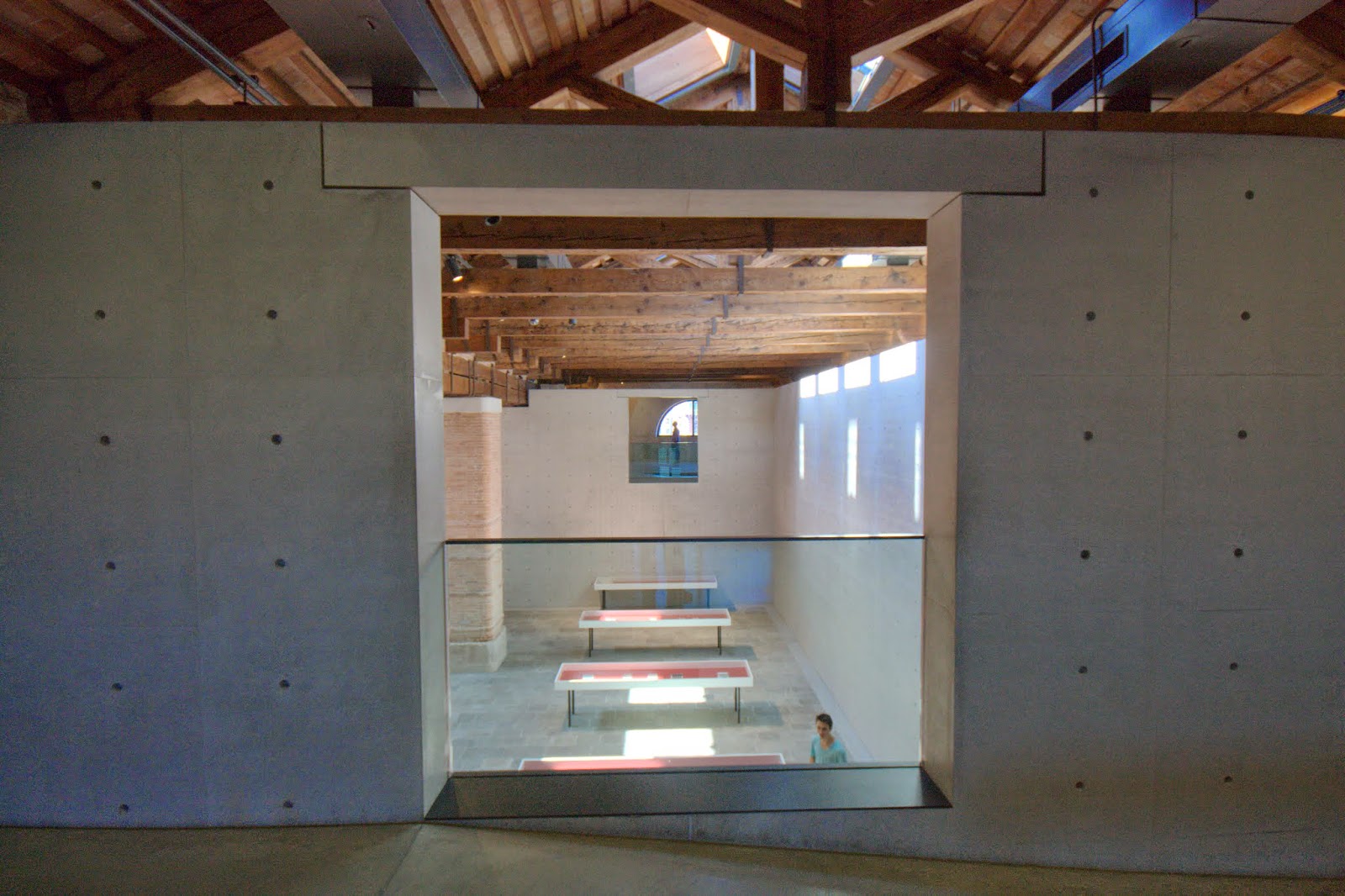 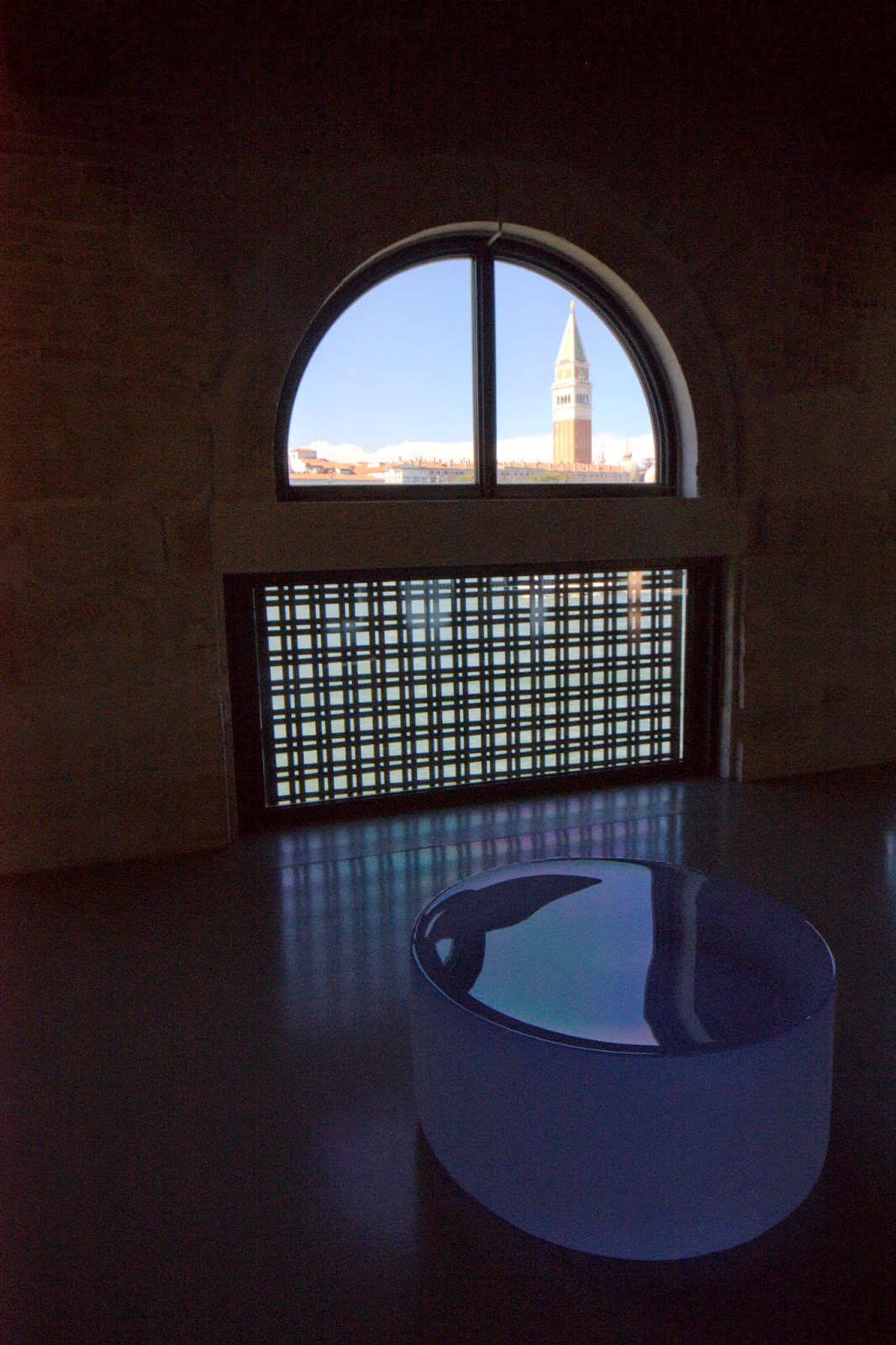 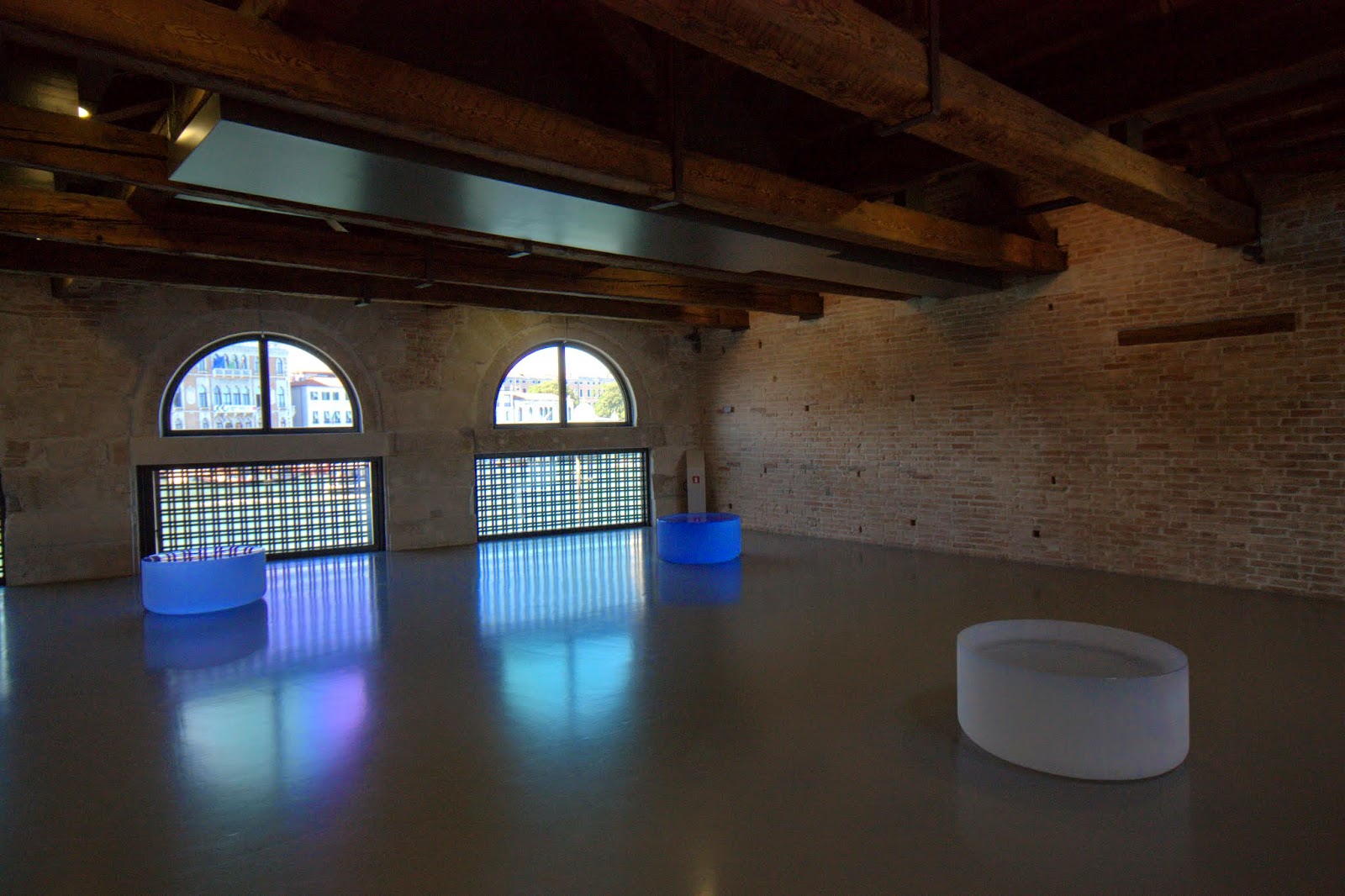 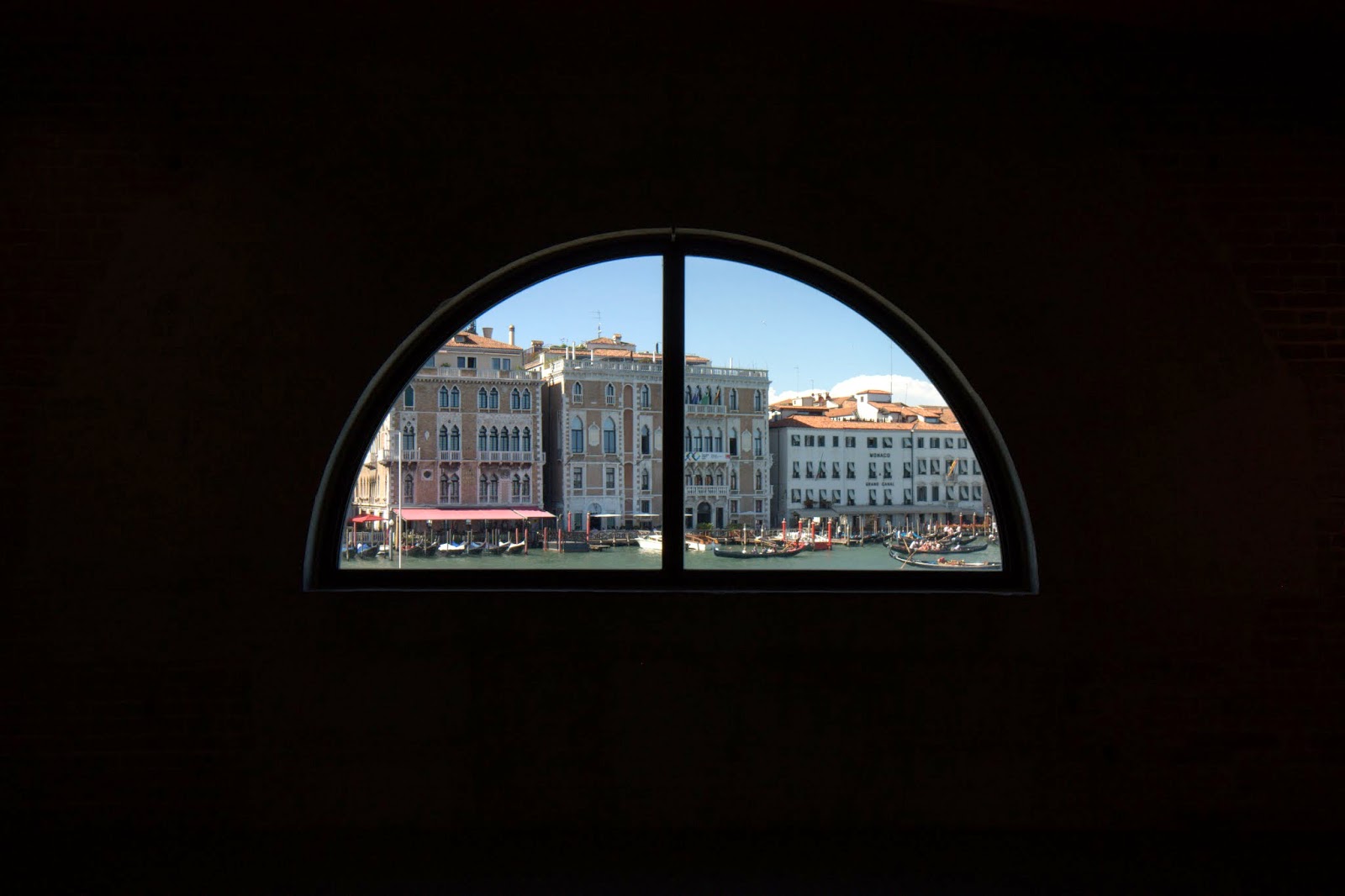 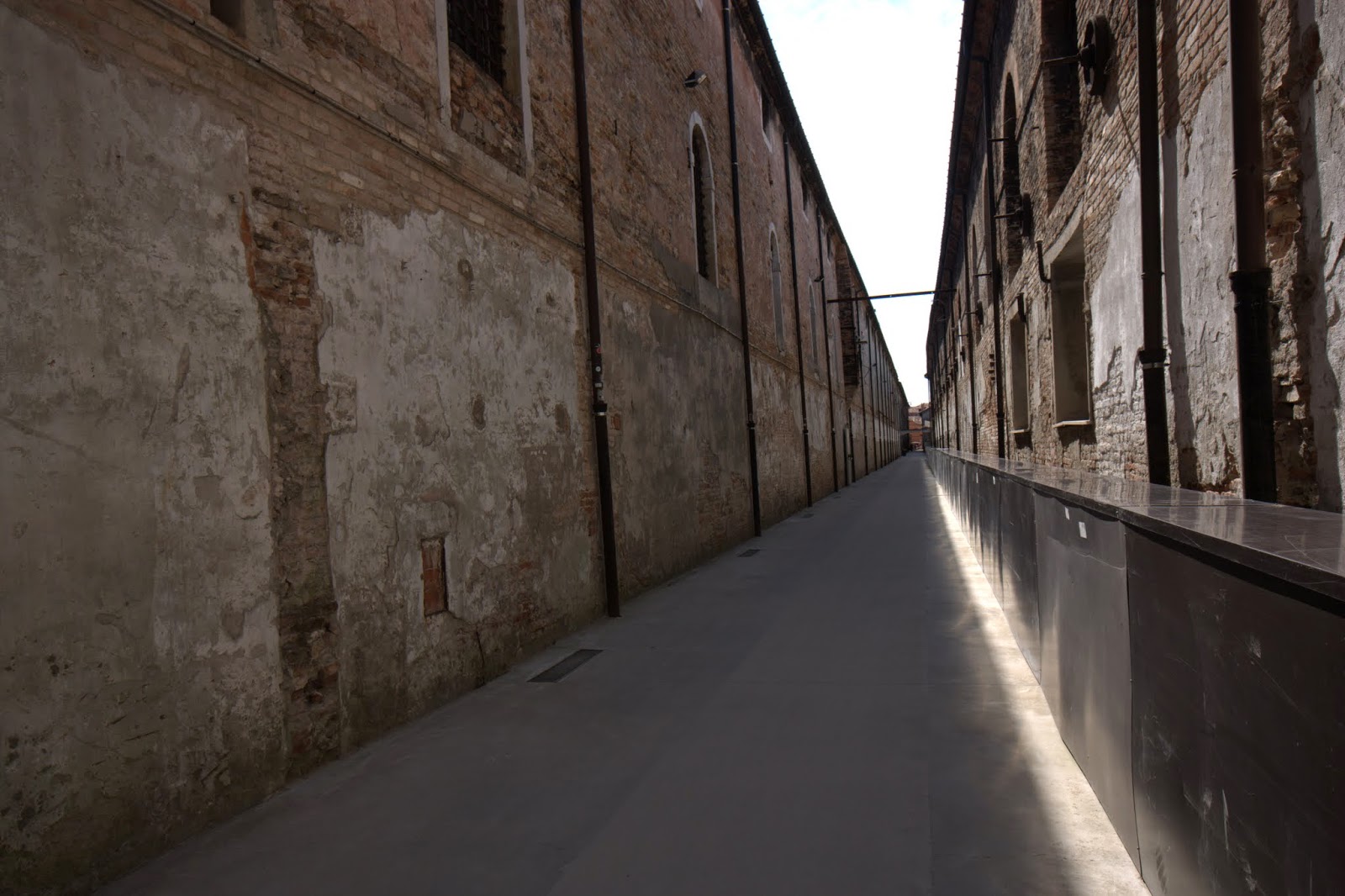 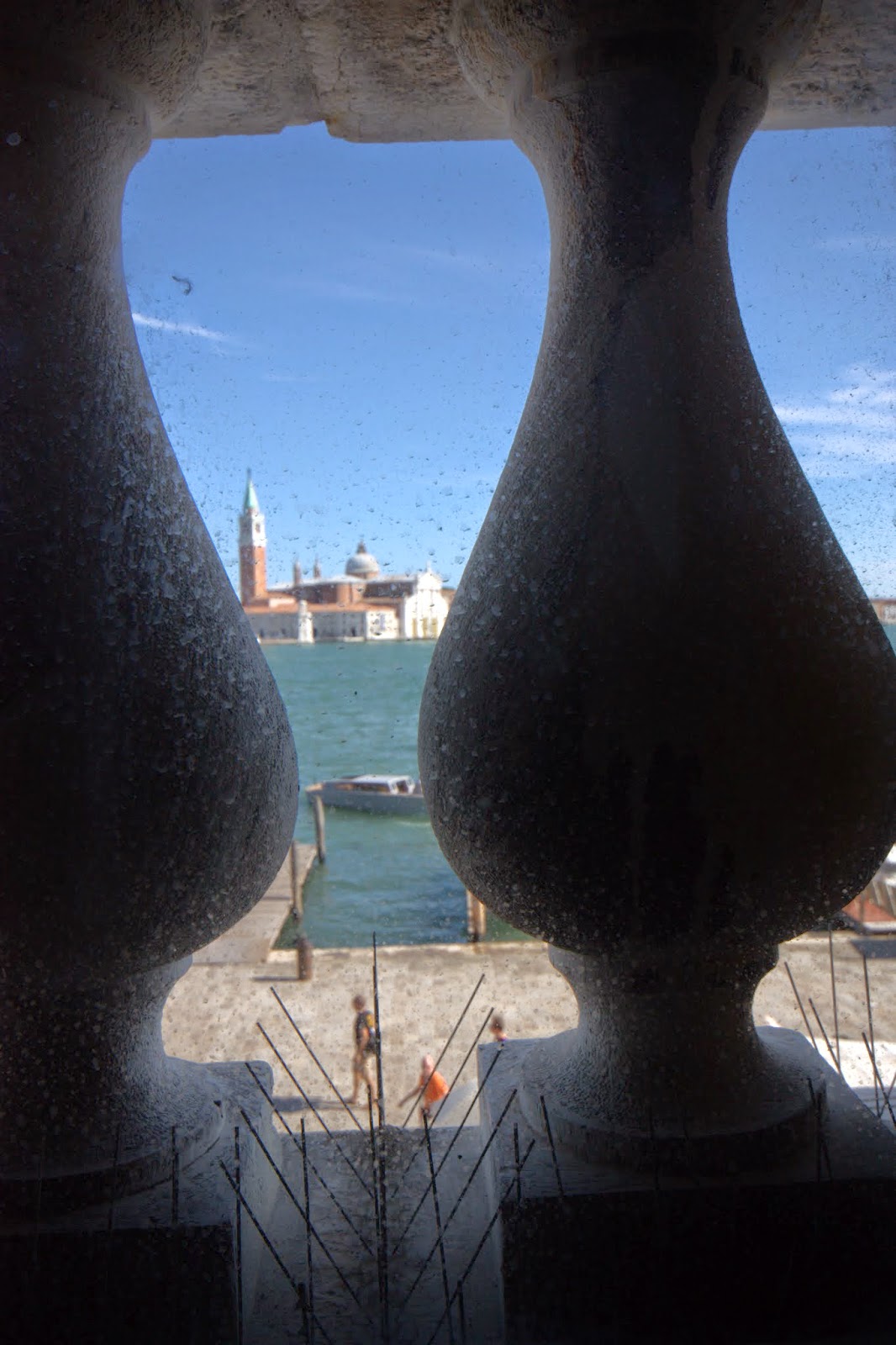 One of Van Gogh's Last Paintings

I loved that one of Vincent Van Gogh's last paintings (which I saw in Amsterdam( was this one, Almond Blossom, which he painted in honor of the birth of his nephew, also Vincent. 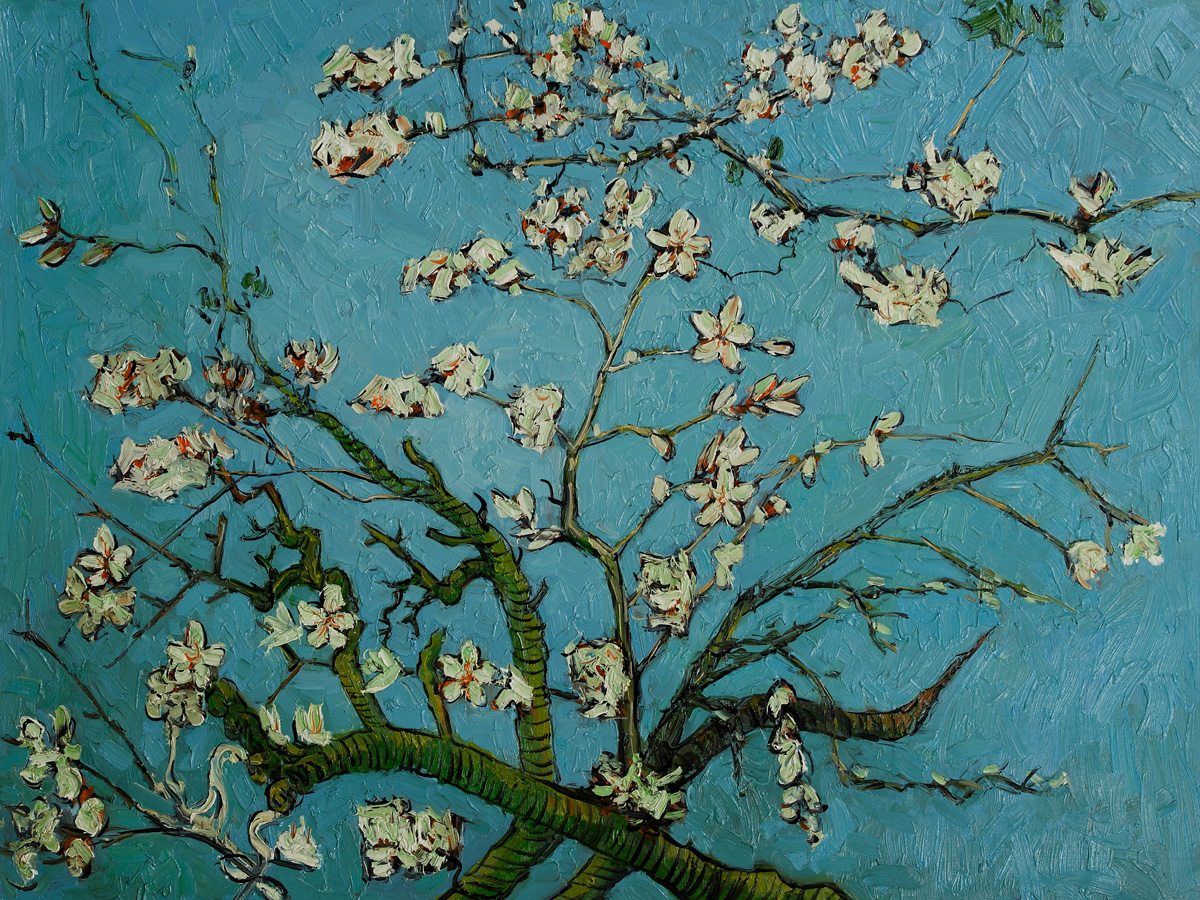